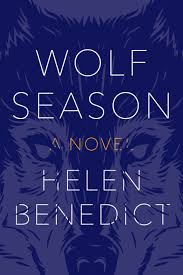 Helen Benedict is the first writer who told me I would have to find my own way in today’s publishing world. She said it kindly; with the intention to help. We were sharing a drink after a full day of conference events at AWP Seattle 2014, and I’ll never forget what she said: “Your career doesn’t have to look like theirs.” In these brief words, so much seemed possible. I heard it as a challenge to rise to the top. I heard it as permission to be different. I heard it as forgiveness for not always knowing my way. I heard it as celebration for what is uniquely mine. And I’ve heard those words again and again, over the years–I keep learning, keep trying.
That is what I think of, when I think of Helen and her work. And more formally, you might be interested to know that Helen is a professor at Columbia University, author of 12 other novels and nonfiction works, and has devoted years to justice work pertinent to women, soldiers, and war.

Katey Schultz: Congratulations on the publication of Wolf Season! This novel is a sequel to Sand Queen (which Publisher’s Weekly named a Best Contemporary War Novel). What can you tell other writers about your experience working in sequel? I’m hoping you might touch on how you knew you had two stories to tell, how you maintained the endurance it takes to tell both stories, and if you had any huge “ah-hah’s” as you drafted and planned, realizing what had to be written, and what had to be left behind.

Helen Benedict: Wolf Season is both a sequel and a stand-alone novel in its own right. I wrote it this way because I didn’t want readers to feel they had to have read Sand Queen first, or vice versa, but also because I wanted both novels to have their own integrity. The only character who appears in both books in a substantial way is Naema Jassim, a young Iraqi woman. In Sand Queen, which takes place in 2003, she is a medical student in Iraq at the beginning of the war. By Wolf Season, which takes place some 12 years later, she is a working doctor and a refugee in the U.S.

At some point after I’d finished one of my many drafts of Sand Queen, I thought about the wonderful World War Two trilogy by Pat Barker called Regeneration. I decided I’d like to try an Iraq War trilogy, and had the idea of following Naema’s story. But to avoid telling the same story over again, I opened Wolf Season with new characters, in a new place, and an entirely fresh story.

The main challenge I found in writing a sequel is what to do with the back story you told in the first book. How much to retell, how to do it without repetition, and how to do it in a fresh way? I was helped a lot by Marilyn Robinson’s Gilead trilogy, because she refers to events from previous novels, but tells them from a different person’s view in a very different way, so they fill in the reader with necessary background without rehashing any parts of her other books. I tried to do that in Wolf Season.

Another challenge in writing a sequel is making sure all the details match – birthdates, ages, eye color, looks, background facts, etc. – as well as the timelines of characters’ lives.

KS: I’m curious about your experiences working and publishing in a male-dominated field about a male-dominated subject matter (though you and I both know that plenty of women populate the military and have since its inception). I’ve frequently been told I should have submitted my war fiction under a gender-neutral or anonymous name. I find this suggestion troubling and provocative; it certainly isn’t any kind of solution to underrepresentation or assumptions. What have your experiences taught you? What resources proved most helpful in self-advocating?

HB: I cannot imagine worse advice than telling a writer she should throw out anything that is unique about her work, including her own gender, to make herself sound like everyone else. I have found that being the author of the first literary novel about women in the current wars – a soldier and an Iraqi – might have led me to be overlooked in some circles, but it also brought curiosity and extra interest from others. My nonfiction book, The Lonely Soldier, about women serving in the Iraq War, came out in 2009, and Sand Queen in 2011, and I am still getting invitations to talk about these books all the time. I suppose, in the writing world, the rare approach of writing about war from the point of view of women soldier and Iraqis has given me what is called “a platform.”

That said, sexism in the literary and military worlds is alive and well. I’ve seen too many panels about “war literature” that include only men; too many reviews rounding up war novels that include only male writers; too many news articles and features that assume the only war stories out there come from men. And, as veteran, poet and playwright Maurice Decaul pointed out to me, too many of those same entities are entirely white.

KS: Please share a “tiny moment” with us. That’s the phrase I use for a moment/millisecond/experience that has stayed with you for years. This should be a true story from real life–a flash nonfiction of your own. If you can, try to share what the “before” and “after” were like for you as you render this memorable moment and why you think it has stayed with you for so long.

HB: I had a moment like that when I was in conversation with an Iraqi woman, a refugee from the war now living in Albany, NY. Her 15-year-old son and brother had both been killed in Baghdad, and she, her husband – an interpreter for the US military – and her daughter and remaining son had fled first to Jordan, then the U.S. She had lost her home, her life, her job as an engineer, her son and brother to our war, yet she didn’t seem angry at Americans. Baffled, I asked her why not.

“We lived under Saddam,” she replied. “We know the people are not always the same as their leaders. I know not all Americans were for this war.”

I have never forgotten that answer. It has helped me understand why she, and many other Iraqis I’ve met, have been able to live here, among us, their enemy, without being consumed by rage.

KS: Let’s end by celebrating the work of another author. Tell us about a book(s) that recently rocked your world and why.

HB: I’ll mention three: Tell Me How It Ends: An Essay in Forty Questions, by Valeria Luiselli. Not a novel, but a meditation, combined with reportage, about Luiselli’s work as an interpreter for children who have fled the violence of Central America and are applying for asylum in the U.S. Beautiful, thoughtful, concise, heartrending.

The Standard Grande, a novel by Jay Baron Nicorvo. This is that rare thing, a novel featuring a woman soldier by a man that actually works. Startling, fresh, moving, funny, and full of unpredictable twists and turns.

She Weeps Each Time You’re Born, by Quan Barry. A novel about Vietnam, dreams, history, spirits, in gorgeous, poetic prose.

If you enjoyed this interview, you might enjoy the conversation Helen and I had four years ago, when I was touring for Flashes of War and she opened up the small, but essential circle of contemporary female civilian war lit authors to me. Read more here.