0
0
[Continuing to catch up on the Alaska trip, today’s update explains the trip to McCarthy and entrance into the Wrangell Mountains writing experience. Tomorrow’s post will include an excerpt of an essay from my time there…]

8/12 Day 14
It’s about 300 miles from Anchorage to McCarthy, Alaska but don’t be fooled by Mapquest’s promise that the drive can be accomplished in fewer than seven hours. KB, an Alaska-born investigative reporter focusing on the Middle East, picks me up around 9:30am, and while our journey never feels it’s taking forever, we don’t get to the Wrangell Mountains Center until 6:30 that evening.

Heading north out of the city, the going is relatively smooth. We cut west into the Chugach Mountains and are slowed only slightly by high mountain passes in our 20+ year-old station wagon. Add in a few major construction stops and re-routes, tourists in rented RVs, however, and one starts to realize there’s no point rushing something beyond our control. We cruise along, the sound of the Subaru’s motor something akin to a washing machine running full speed in an airplane hangar (ie., L-O-U-D, echoing…tumbling, almost).

Most breathtaking, of course, is entering the Mat-Su Valley (where the Matanuska and Susitna rivers join) and seeing the Matanuska Glacier, as shown below. If you’ve never seen a glacier before, note the gray/brown/black areas of moraine filling the valley floor. The moraine is a mass of earth and rock debris carried by an advancing glacier and left at its front and side edges as it retreats. 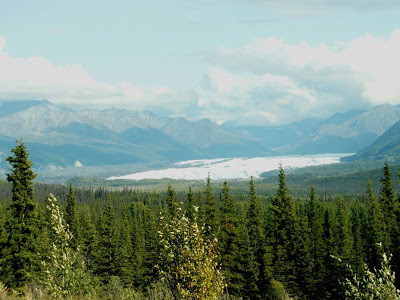 The drive into the interior of the Copper River Valley is breathtaking. Forests of black spruce spread across wide, open expanses or low-laying boggy fields. These trees are Dr. Suess-like in nature, with angled trunks and curved tops, funny burls and warts, some barely hinting they are still alive. The widest black spruce along this drive are perhaps 12” d.b.h., but most are less than that. Their evergreen needles are often brown or black, with dark bark along the trunk and branches. Forests here appear miniature to my eye, which on this gloriously sunny August day is difficult to understand. But imagine temperatures of 55 below zero for weeks at a time. Imagine wind curling in the high alpine cirques of rim after rim of mountains, then collectively swooping into a valley and raking every millimeter of life with a cold snap that doesn’t let up for five solid months. 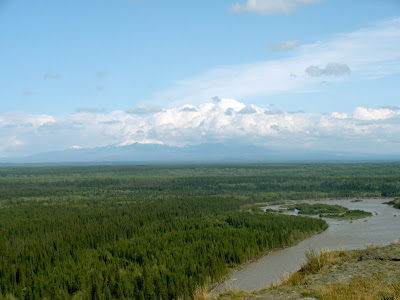 Finally, we turn off AK1 at Glenallen and curve southeast down AK 4. Pass Copper Center, hang a left at Edgerton onto Route 10 and press on for another 25 miles to Chitina. We’re still following the Copper River, which here is fed by smaller low-level streams and creeks in this “less dramatic” area, but trace any one of these streams across the muskeg and up into the hills with your eyes, and soon enough you’ll see the gigantic toes of the high peak Wrangells stretching into the valley floor (shown above). Follow those toes higher, past the glaciers and into the white out of clouds, and imagine a row of 16,000-foot peaks cutting into the sky. The elevation change is so dramatic that in some places the landscape grows from 3,000 feet above sea level to 15,000 feet in a distance of only ten miles.

For almost 80 miles, we’ve been following the Wrangell-St. Elias National Park and Preserve boundary line on our left, this park and preserve being the largest in the United States and also one of the youngest. Only 11 years old on the books, the Wrangell-St. Elias spans over 13 million acres, which is approximately twice the size of the Adirondack State Park in New York and nine times the size of Yellowstone National Park. Chitina is at the end of the line, so to speak, being the last “town” before the famed McCarthy Road. To put Chitina in perspective, the “town” has a single hotel and art gallery, a bar and restaurant, and a few scattered trailers. No doubt there are other homesites hidden in the foothills, but not many. In fact, in the past 80 miles we’ve seen only as many houses as one sees in downtown Bakersville, North Carolina.

KB and I stop to stretch in Chitina, sting our fingers in the silty Copper River—much wider now that the valley has poured itself out for so many miles and the Chitina River has joined it—then hop back in the Subaru to complete the last and most difficult part of the drive. The McCarthy Road sits atop an abandoned railroad bed. It is 60 miles long, all gravel, potholes, and washboard. Old railroad spikes jut from the road like land mines, waiting to kill tires and delay travelers. Re-routes to newer, better bridges over vast creeks (big enough to be called a river anywhere else in the country) help us safely along the way and a little over two hours later, we arrive at the footbridge crossing over the Kennicott River. Look closely beyond the parking lot and you’ll see the moraine of the Kennicott Glacier in the immediate background. Beyond that, the gigantic, looming, wall of white is the near edge of the glacier itself, a living animal moving slow and steady, carving its way with the language of water and ice. 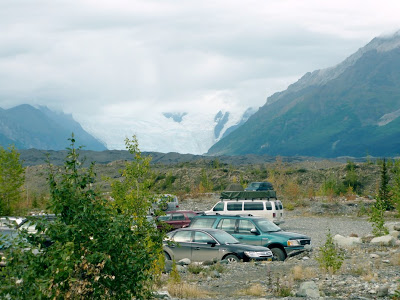 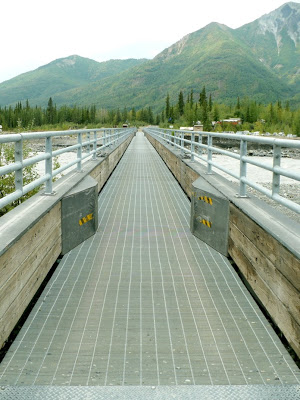 KB and I unload, haul our gear using hand carts over the footbridge, and are greeted by the cheery Wrangell Mountains Center staff on the other side. The vehicles they pick us up in were driven across the frozen Kennicott River during winter, the only way to get a car to this part of the Park. A few minutes down an old road, and we enter the small town. Here, at the end of a 60-mile gravel road in the middle of nowhere, further into the beginning of the middle of the Wrangells, a summer population of about 300 people reside in McCarthy. There is a bar, a hostel, a few old lodges and hotels, a gift shop, a river guide and pilots headquarters, and a mercantile. There is also one of the coolest places to write on the planet, and so our week of words begins. 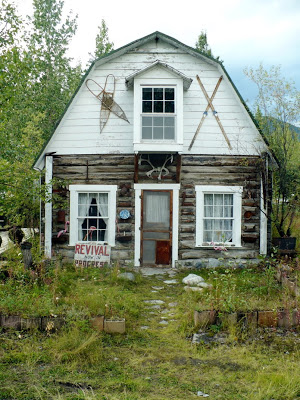 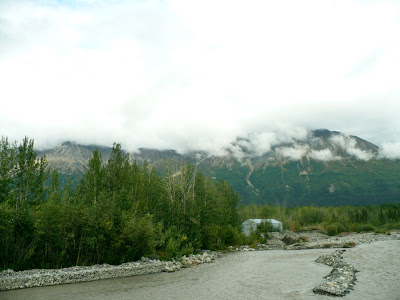 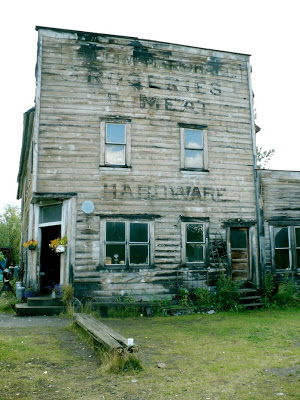 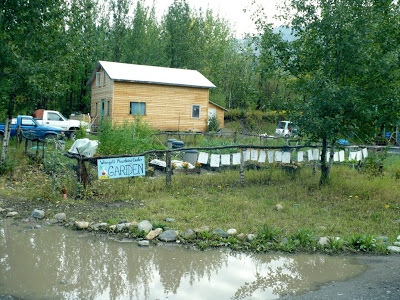 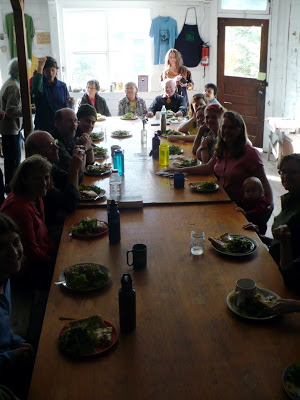