Story of the Sai

0
1
In preparation for my upcoming sankyu (brown belt) test, Hanshi introduced me to the sai last week. This ancient martial weapon takes after an agricultural tool used for planting seeds. The long, middle spear was pressed into the soft soil, allowing a farmer to easily deposit a seed where it needed to go. 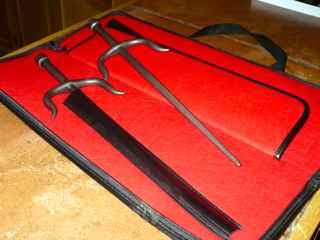 [Hanshi loaned me his personal set of sai this week, so that I can practice Taikyokyu Sai, an ancient martial weapons form.]
When the Japanese invaded Okinawa during feudal times, they not only made physical invasions but also attempted to destroy Okinawan culture.The first thing they did after gaining control in Okinawa was demand that everyone hand over their weapons. There remained only one communal knife in each village and it was chained in a public place where it was accounted for daily. This knife could be used by famers to slaughter animals but could never be removed from its central location.
To continue their martial arts during this invasion, Okinawans developed kobudo kata, or ancient martial weapon forms. What we call a bo staff (like a broom handle without the broom head) was used to carry buckets of water and grain, as farmers slung the bo over their shoulders, a bucket dangling from either end. What we call the sai (or trident, though that’s not quite the same) was used for planting seeds. There are other agricultural tools adopted as martial weapons, each with its own story.
The Okinawans weren’t the only people who were invaded and forced to preserve certain aspects of their culture in secret. They trained in hidden meeting grounds and narrated stories with their movements (or katas) that only a few could decipher. Later, the Maori and the Hawaiians adapted their martial arts to disguise intent as well. Study the Maori arts and you’ll see a lot of percussive slapping and shifting, making their forms look like a tribal dance. In fact, a slap was often an elbow break or a head slam into a knee. Study Hawaiian Lua (which evolved into the tame, touristy Hula) and you’ll find an ancient art of bone breaking so brutal that tribal members could sever every limb from an invader’s body without using a single weapon.
Taikyokyu kata is a basic form that can be practiced with or without weapons. It fends off 8 imaginary attackers in 22 moves with an embushen (blueprint) in the shape of the Roman numeral “I.” At the dojo, I moved in crescent steps across the tatami (mat) and charted my path along this imaginary “I.” This helped me remember where to place my feet for each move. Hanshi’s coaching from the sides also helped (“Furl, now theory. And step, jab, furl, yes…Repeat. Go back where you came…now furl, hold the crane stance…and theory…”).

I like thinking about the history of this kata when I practice. It’s not that I focus on the violence of it—hardly. But moving in this precise, principled way across the mat through a series of movements 1,000 years old conjures its own sort of energy. When I work any karate or kobudo form long enough, my mind and body become one. It’s at this juncture that I can understand why a culture might go to such extremes to preserve these ancient forms. The harmony of breath and movement does more than mimic spiritual ascendance, for brief moments it actually makes such ascension seem possible.