Lost Crossings: One More Letter from the Family

0
0
For new readers, this letter is the 3rd I’ve printed from fans of Lost Crossings, the community-funded book project published by myself and Shane Darwent. Learn more or order the book at http://katey.schultz.googlepages.com/lostcrossings or simply enjoy the stories this reader had to share with us. I have added a few images of the bridge she is talking about. 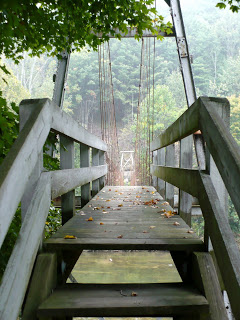 “Katey and Shane,
I have been very interested in your research and photographs of the bridges of Mitchell and Yancey Counties having heard about your work from Corinne Canipe while visiting her this past summer. [Corrine is the widow of George Canipe who designed, surveyed, and helped build the swinging footbridges.]  Corinne’s daughter married my husband’s brother.
The Roses Branch Swinging Bridge in particular has played a vital role in my life.  I grew up on the Mitchell County side of the bridge where we used to play and throw rocks off the bridge during those lazy summer days when it appeared there was nothing else interesting to occupy our time.  Of course, we had to be on the lookout for copperheads as they reportedly lived in close proximity to the bridge and the nearby railroad tracks.
A family living just across the bridge on the Yancey County side had children who attended school in Mitchell County.  These youngsters walked across the bridge every school day, regardless of the weather, to catch the school bus at the end of Roses Branch Road.  Have you ever tried to walk across a swinging bridge in a snow storm or heavy wind carrying a load of school books?  It could be a frightening experience for children and, I dare say, to most adults. 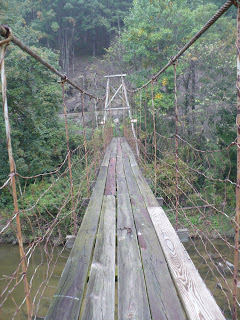 My husband of forty-six years crossed the bridge many times to visit me before we were married.  He has interesting “tales” to tell of leaving my house late at night and riding his bicycle home approximately eight miles, five of which were on a gravel road.   Crossing the bridge on his bike was no problem for him, except that he became frightened of the many night noises of wild animals, thunderstorms and creaking of the bridge, not to mention the total darkness which enveloped him on his ride home.  His grandfather would tell ghost stories to deter his bridge crossings to come “courting” but he was never scared enough to stay away.  Obviously, the Roses Branch Bridge has played a vital part in my life as without it there would have been no link to those twice a week visits from my “sweetie” from Yancey County.
Having lived in New Jersey for the past thirty-seven years, we recently retired and moved back to North Carolina.  We have a renewed interest in the state and the many wonders it has to offer, especially the few remaining bridges in Mitchell and Yancey County.  Thank you both for your interest in these bridges.  Perhaps with the popularity of your book and photographs, there will be interest and funding in preserving those bridges as a vital part of our states history as they truly are “Lost Crossings.”
Sincerely,
[extended family member’s name]” 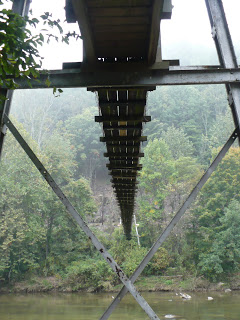