0
0
The word “community” comes from Old French comunete or, “reinforced by its source.” An Old English word for community was gemænscipe, meaning “fellowship, union, common ownership.” Attending tonight’s North Carolina Clay Club meeting, I felt all of the above.
An informal group that meets once a month, this crew of ceramic artists from Buncombe, Madison, Avery, Mitchell, Yancey, and McDowell Counties likes to talk shop, share a beer, and occasionally get down to business. ‘Tis the season for holiday cheer, so tonight’s potluck included a “mug and tool swap.” As the only non-potter in the crew, I offered a copy of Lost Crossings instead. Numbers were drawn, breaths held, and in the end I received my very own Mark Peters mug, perfect for a long-steeping tea and general coziness. 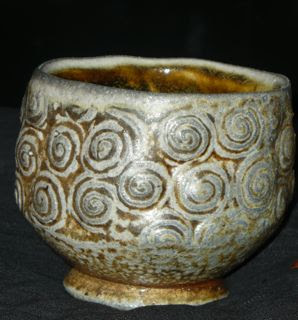 [Side/front view]
What I like most about this mug is how the glaze on the inside is dark without being overly glossy or reflective. Its various layers of color mimic texture and invite the user to get lost inside the wide-mouthed mug. This “cosmos” glaze [my word]  on the inside is a nice counter to the earthy tones across the outside of the mug. 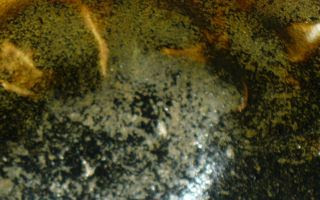 [Inside “cosmos” glaze]
It’s always interesting to hear studio artists discuss pertinent topics: glaze prices, gallery juries, adjunct teaching positions. But what I felt even more tonight was the sense of connection to this community that I have. It’s a community I have been writing about for four years. A community that welcomed and trusted me, encouraged me and thanked me. When my own artistic endeavors were on display for Lost Crossings, that same community supported my work by buying the book and attending the opening. Here etymology comes in handy again, as in the original French meaning of “community,” in which my work was “reinforced by its source.”