0
0
It’s hard to put Day 3 into words if for nothing else than the fact that I’m exhausted. But it began with silent reading about the great lakes region. I read in bed in my pajamas, the heaving Pacific Ocean an easy view from my window. I’m not as impressed by these texts as I was, say, by the reading I did about Alaska. I’m doing the work though, trusting that this immersion is part of my process of entry, as it always has been. 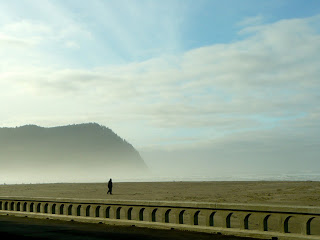 [Real sun on the Oregon Coast – imagine that!]
Next, I attended Benjamin Percy’s craft lecture on “Rhyming Action in Fiction and Nonfiction,” learning about the ability writers have to imbue objects, setting, and manner of speech with emotional currency. This allows us to align narrative with the emotional arcs of a character so that these tropes are realized—yet very subtly or subconsciously. There is a fine line with the technique of rhyming action because if a writer pushes too hard, it becomes gimmicky or overly symbolic. Percy advised us to keep the process intuitive: “It’s as though you just write it initially because there was some fairy dust on it and now you’re doing something technical with it.”
Lunch was a bag of coveted Oregon saltwater taffy, a garden salad, and a beer with a Pacific alum and longtime editing friend. He’s starting a literary journal (a longtime dream of his) and has asked me to be on board. That’s the short version. The long version will be revealed when we go live online. Suffice it to say I’m flattered and I’m also totally on board with his mission. I think we’ll make a great team. (Ok, I’m actually totally giddy but I’m too tired to show it.)
Between graduate readings, faculty readings, and exercise the sun set before I knew it and I found myself in the hotel bar completely bleary-eyed by 10pm. Still, conversations came at me left and right and I perked up as much as I could until finally, a very short moment from now, my head will hit the pillow…