0
0
“The hottest thing you’ll see happen out on the ice is one of these flags tipping up,” says the ice fisherman, our guest teacher in Mr. Copeland’s ecology class. He’s holding a “tip up,” a hand-built, simple wooden brace that rests atop an ice hole and holds the line so that a fisherman doesn’t have to. 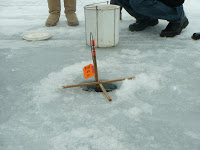 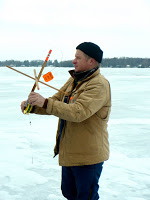 He’s not wearing gloves and although today’s a “balmy” 30 degrees in lower northwest Michigan, I find this notable. “They’re so callused, I can’t feel anything anymore,” he laughs. “Including the cold.” He’s been on the ice since 5am and won’t leave until suppertime.
“I grew up on this lake and I’ve fished it in every season, so I happen to know that about where we’re standing now there’s a 30 foot long bar that extends out from the shore. On either side of it, the water is deepest and that’s where the pike like to live.” Pike are the big game on this lake, with a minimum catch size of 2 feet. While other ice fishermen will hunt smelt with nets (it takes at least 100 smelt for a meal, bones, brains, and all), one good pike will go a long way.
Our bait? The golden minnow. 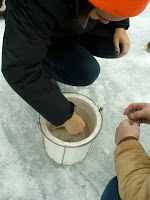 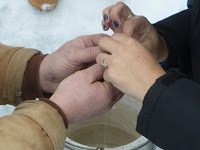 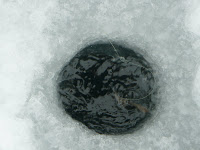 Some students whimper at the minnow’s suffering. Others seem nonplussed. A few stand chillingly still. “If you’re cold, spud a hole,” the ice fisherman shouts. We leave the tip up behind, keeping a watchful eye on the flag, and follow him toward a sled full of supplies. Here he introduces us to a steel spud for manually boring holes into the ice. He’s careful to remind them about looping their hands through the string, lest they suddenly break through the eyes and lose the spud. The handy auger also works well, but it’s more expensive and bulkier. The students have a go at both. 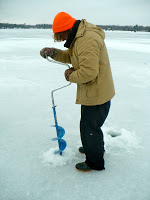 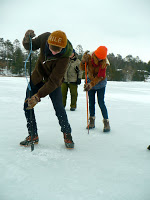 Later, we’ll have spud races but for now we need a break. This hardwater season already has 12 inches of ice across Green Lake. In the ice shanty, we experience another world. Tucked behind the windproof blue walls, everything takes on an underwater hue. The hole in the ice here was made the same way, but with a succession of circles rather than a single one. It glows in the shade of the shanty, the quiet sloshing of the lake like a tongue reaching up to threaten our footing. Pike can be lured with wooden bait (that’s the “fish” floating beneath the surface) and then stabbed with the lead, multi-pronged spear. “But you’d better know that pike is 24″,” says Mr. Copeland. “Because once you drop that thing on it there’s no going back.” 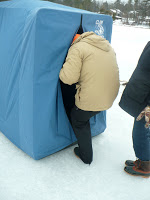 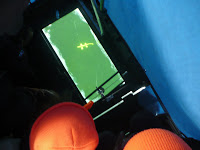 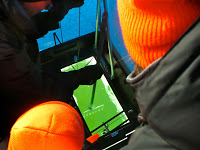 Finally, duty calls. “There’s a tip up!” Shouts one of the students. All eyes look toward the flag, then a slough of orange hats bobs in a reckless mach across the ice. It’s just a teaser, it turns out, but the minnow is missing some scales and certainly we’re on the right track. 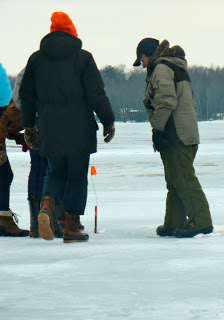 Alas, the dilemma persists. It’s warmer in the shanty! But there’s a long walk back across the ice and dinner waiting in the cafeteria. We call it a day, one pike missed but many more opportunities fulfilled. 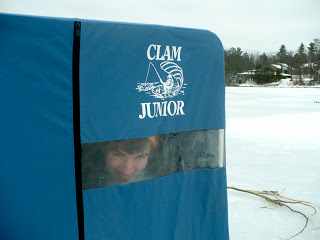