0
3
*Names have been changed.
It begins with the smell of wet leather, then the steady scuffing of boots down the aisle of the school bus. It’s a scene from my past except now I’m reliving it with the confidence of an adult and the cliché yellow bus doesn’t seem as daunting as it once did. This is Mr. Copeland’s ecology class and I’ve tagged along on their mission to find a snowy owl.
“There was a drop in the lemming population on the tundra this year, as per their usual cycles,” says Copeland. “Right now we’re seeing three or four times more than we would otherwise. The males will usually tough it out up there but the females, which are about 1/3 smaller, are likely to be stalking the fields this far south.”
It almost seems too easy as we drive through the small town of Interlochen and down state highway 31 toward Traverse City. After about ten minutes, Copeland turns off of the 4-lane highway and parks alongside a snow-covered field. “This is prime feasting territory for these birds of prey,” he says to the class. “You want a relatively flat, open field with a few grasses and shrubs poking through. It’s got to be something a farmer worked this past fall because without any grasses to hide in, there won’t be any rodents or insectivores tunneling around in there.”
We grab our binoculars, snowshoes, hats, and gloves and hop out of the bus. Scanning the fields for about five minutes, the class of 9 students has just about given up when one of them spots the prize. “I see it!” a young man shouts. “Over there on that telephone pole!”
As if following the ball in a tennis match, our gazes simultaneously turn south in the direction of the poles and sure enough—my first snowy owl. 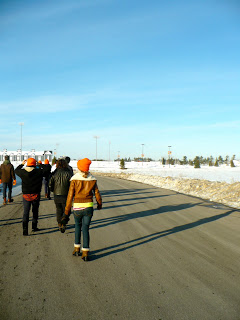 “Let’s suit up, kids,” says Copeland, bending down to strap on his snowshoes. We want to get close enough for a better view, but not so close as to make her fly off and burn calories she can’t afford to burn. As we bend and shuffle to step into our snowshoes, one of the students looks up again and announces with disappointment: “She’s gone.”
Silence. We look again, binoculars in hands, and scan fields further in the distance. In another minute about half the class has found her at the same time, this time perched on a light pole near a sports field.
We hop in the bus for another attempt. “Owls one point, humans zero,” says Copeland.
“It’s like a northern Michigan reality TV show,” says one student. “Owl Busters.”
A few blocks later, we’re in position and this time she’s in our sights with the high-tech monocular Copeland mounted onto a tripod. I took this photo through the lens: 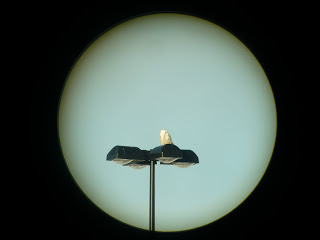 “Look how smoothly she moves her neck!” says one student. “Her face is so beautiful,” says another. “She’s preening!” says one girl, “and even her beak has fur on it!”
“That’s right,” says Copeland. “Their beaks and their talons have fur to protect from the deep cold. And even though their eyes are only the same size as ours, they take up over fifty percent of the space in their skulls and can see ten times further with infinitely better resolution than humans.”
He reaches into his pocket and pulls out a miniature suitcase full of owl skulls. The students are amazed as this maneuver but Copeland doesn’t let them dwell on it, as he knows we only have so much time for viewing before we have to move on. “The skull is only connected in one place here, at the axle vertebrae.” He handles the skull carefully, then passes it around to the students. “That’s one thing that allows them to rotate their heads 270 degrees in either direction,” he says. A student returns to the monocular and, as if perfectly timed, observes this movement in the live owl perched high in the distance.
We pile back into the bus to drive to another spot with row after row of fence posts, prime picking areas for those in search of owl pellets. But before we get more than a minute down the highway a student spots another snowy owl, this one perched at the very top of a tree. 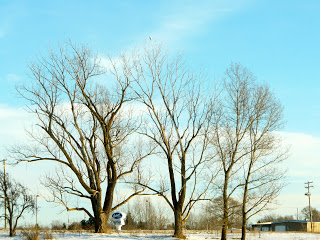 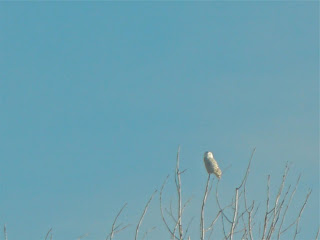