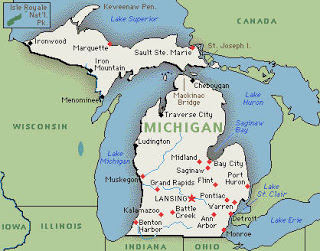 The eastern shore of Lake Michigan has the most extensive system of freshwater dunes in the world. Sleeping Bear Dunes National Lakeshore is part of the National Park System and hosts more than 1 million visitors annually. On the map above, the protected portion of the Lakeshore lies east of the “M” in Michigan and extends northward toward that triangular peninsula above Traverse City. 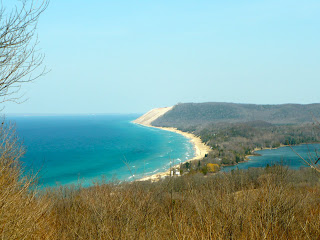 I can get to the first marked trail in the Lakeshore system in a little over 20 minutes by car. Half a mile hike, and the view of Lake Michigan is utterly tropical. Thousands of ships have wrecked in this lake, and thousands of lives have been lost. To stand on the shore of a body of freshwater this vast is to evoke a paradox, since many particulars of a saltwater shoreline are in place: the sun is shining, the sand is soft and clean, there is no land in sight, there are tides, and there are whitecaps. But there are no starfish. There isn’t any salt left on my hands after I dip them into the water. That pungent ocean smell of seaweed and shellfish is entirely absent.
The Great Lakes contain 1/5 of all surface freshwater on the entire planet. They are “potable,” so to speak. They are tremendous in size and geological history. They are impossible to take in. And with any luck, as each year passes they are becoming cleaner and cleaner—Lake Michigan included. 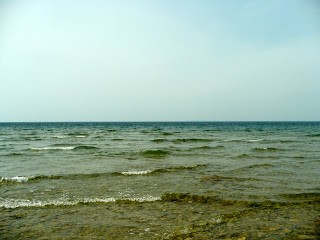 Driving northward for almost two hours, there are a dozen more trailheads inviting investigation, including this stop here for the “Dune Climb” which nearly killed the filmmaker. 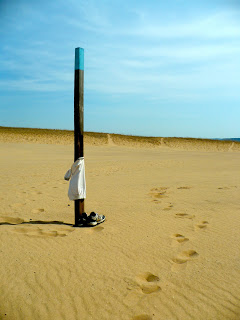 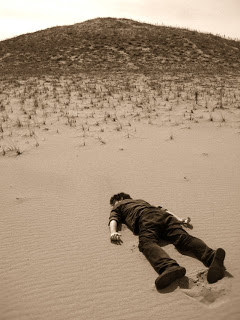 A few towns take over where the protected Lakeshore ends, but a few miles further Leland State Park begins and so it is that I find myself standing at my farthest point of land into Lake Michigan to date. 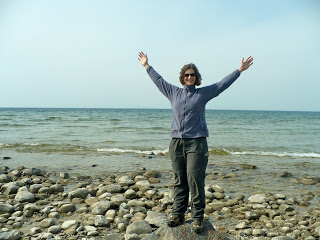 There are so many treasures in this part of the country. It’s far enough north that the forests are borderline boreal. Evidence of glaciers is everywhere, but only intuited when seen from above or reminded by the discovery of Petoskey stone from the Paleozoic Era seas or scat fossilized in a piece of granite, for instance. Even the dunes themselves are rich with detail. There are back dunes, fore dunes, blowouts. There are perched dunes, linear dunes, and walking dunes. Most common in this area are the parabolic dunes, which my trusty copy of Home Ground: Language for an American Landscape defines as:
“Parabolic dune: A dune with the crescent swoop of a parabola whose tapering arms point into the wind, not away from it, as happens with the barchan dune…In their natural state, parabolic dunes advance more slowly than barchan dunes but overwhelm whatever is in their path…Michigan’s Sleeping Bear Dunes, on the eastern shore of Lake Michigan, harbors many parabolic dunes among its striking array of perched dunes.” (D.J. Waldie) 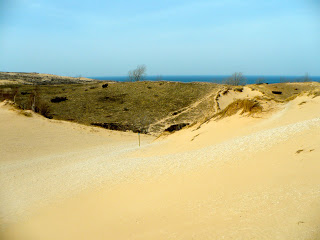 What’s a perched dune, you ask? For that I go to Jerry Denis, author of The Living Great Lakes, who explains that perched dunes are dunes atop ancient glacial moraine.
There will be many more posts in the coming months about the dunes and Sleeping Bear National Lakeshore, which includes two islands I can take a ferry to this summer. Stay tuned! 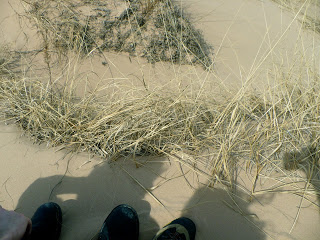