0
1
We’re at the Otter Creek trailhead and though today’s hike will be more like a nature walk (sponsored by the Park Rangers), I’m struck by my surroundings all the same. The red dogwood shrubs are just showing their buds. Pussy willows are further along, with a few gray, fuzzy tips evident along the plant’s slender, tough stalks. Evergreens and golden beech leaves aside, I have not seen a tree with a leaf on it in six months. That’s almost long enough to forget leaves altogether. 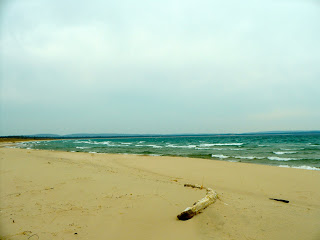 But what’s most striking about today’s hike is the fact that in the late 19th Century, this area was a burgeoning logging town. The town of Aral hosted several boarding houses, a fish market, post office, and other community buildings. There was a steam-powered sawmill and everyone who lived in town was connected to it in some way. In the upper left quadrant of the above photo, you can see where Otter Creek flows into Lake Michigan. Here is where sailing ships and steam barges moored to the docks. The sawmill was just beyond that. 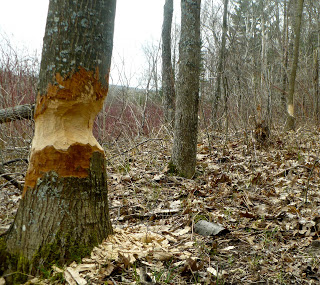 It would have been unusual to see something like this back in those days, as beavers were nearly hunted to extinction during the logging boom. If they weren’t hunted, they died from loss of habitat. Their forests were logged. Their waterways used for transportation (thus ridding them of their damns for mating and shelter). How do we know this is the mark of a beaver and not a porcupine? First of all, the bite marks are too big to be a porcupine. But most notably, porcupines eat their way up a tree, nibbling the bark from soil to sky. Beavers, since they are water-going creatures, don’t move as keenly on land. They fell the trees and then nibble the bark once it’s down on the ground, safe, where they can quickly retreat along any one of these beaver trails and back toward their dens. 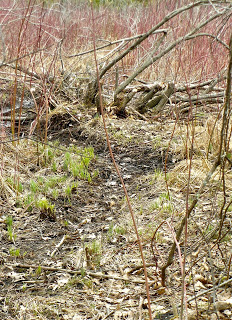