0
2
I’m talking on the phone with John Carr Walker, Editor-in-Chief of TRACHODON magazine. We’re trying to figure out the timing of things, prioritize tasks for Issue 1, and still maintain an eye on the big picture for our little dinosaur of a magazine that will someday achieve world domination.
“So,” he says, “you’re leaving for Alaska in a little over two weeks, right?”
“Yeah,” I say. Then: Wait. “In a little over two weeks?” I look at the calendar and confirm. As soon as we get off the phone, I make a frantic list titled STHTGDBAK, or: Shit That Has To Get Done Before Alaska.
I’ll spare you the list and let this photograph summarize instead: 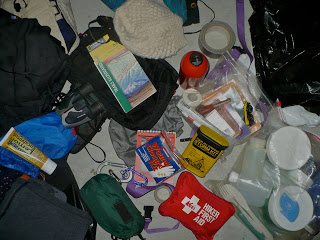 [The contents of box 1 of 2 labeled “backcountry,” from which I must sort my gear for the upcoming trip.]
The challenge, of course, is that I don’t know entirely what I’m packing for. While I still aspire to backpack in the Brooks Range, my writing and hiking partner KB recently called to tell me it’s been a cool summer and there wasn’t much snowmelt since the spring. Translation: If we’re going to backpacking above the Arctic Circle in September, we’ll have to carry 4-season gear, thus adding to our gear weight. More weight for gear means less weight for food, since KB and I can only carry so much. I can hike long and far, but if my pack is much over 60 pounds and we’re off trail, that’s where I reach my limit. But if we have less weight for food, that means a shorter trip, which means that getting flown in and picked up by plane is less and less likely (and more and more costly).
Knowing that we might go backpacking in the Brooks Range but that we’ll certainly backpack somewhere within a day’s drive (in an 8-cylindar old-as-shit Ford truck) of Fairbanks hardly counts as specific packing instructions. Then there are the other legs of my journey: day hikes in Denali (Solo? Hike with someone I can wrangle into going with me?), writing in a cabin, giving a public reading in Fairbanks, daily hikes to a water source, no showers, and travelling by foot, car, plane, and train. However it works out, by August 12th I have to have 6 weeks of ready-for-anything-Alaskan packed into this 4,000 cubic inch backpack: 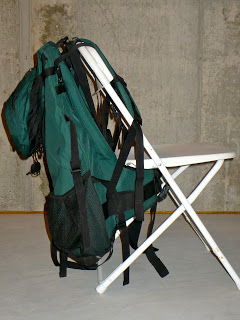