0
2
I don’t often identify with the word “patriotic” but that’s how I feel when I listen to someone like Lyle Lovett. Consider his song titled “If I Had a Boat,” which begins with these lines:
If I had a boat, I’d go out on the ocean
And if I had a pony, I’d ride him on my boat
And we could all together go out on the ocean
Me upon my pony on my boat.
The simplicity and absurdity of the scenario being described is what strikes me at first, but the subtext of the American spirit is what really resonates. The lyrics highlight notions of freedom and possession at their very best—harmless and carefree, rather than power-hungry and exclusive. 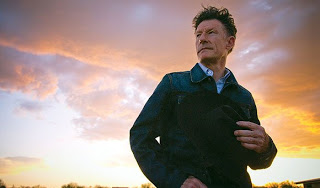 Tonight, I attended my final concert at Interlochen’s 2010 Summer Concert Series: Lyle Lovett and his Large Band. It’s the second time I’ve seen him in concert and as long as timing and funding allow, I’ll pay to see him perform any town I’m in that happens to host his show.
“If I Had a Boat” moved me to tears and “Keep It In Your Pantry” had me shaking in the aisles. “Farther Down the Line” felt like a bit of Texas dropped right into northern Michigan and “I’ll Come Knockin’” paired down to just fiddle, guitar, bass, and 3 vocalists on 1 mic sounded straight out of Carolina. At times there were 4 musicians on stage and other times there were 14, each of them wearing a white collared dress shirt and black suit (except for Sweat Pea, who is known for his slate blue suit). I hoped to hear “L.A. County” but struck out; still—for a 2 hour show I’m not complaining.
So here it is, folks—my unadulterated pitch to buy a Lyle Lovett album if you don’t already have one (try Step Inside This House, 2 discs). If you hesitate because you don’t like “country,” you’ll be pleasantly surprised to hear the occasional gospel backup singing. If you’re shy about bluegrass, you’ll be amazed at how it translates into 4/4-time rock. What Bruce Springsteen is to rock ‘n’ roll and working class Americans, Lyle Lovett is to root music (folk/bluegrass/country/some blues and rock) and working class Americans. Have at it!
Showing 2 comments