I’m the only person here and when I’m sitting at the desk, I don’t make a whole lot of noise. Last night, the thudding and thumping outside the west wall of the cabin was unmistakably not my own. It was after 10pm—dark enough that I couldn’t decipher much through the windows.

Then the noise again: a clear, distinct, clomping alongside the house. I stopped typing, bowed my head, and covered my ears with my hands. I was not about to psyche myself out. Bear or moose or whatever, I didn’t want to know. If it sounded like it was getting into something, then I’d investigate for the sake of the cabin. But for the simple sake of curiosity, forget it. I’ve lived alone in cabins before. There are just some things not worth knowing, at least not at night. Alone. Without a car. Without health insurance. Without, really, much of anything other than some badass karate moves. 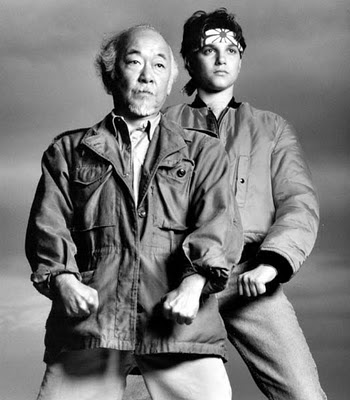 [Thank you, Mr. Miagi]
And yet there it was, so undeniably nosing around the perimeter of the house. Past the west wall and now what sounded like eight feet from the front door. There are some old cabinets along the edge of the front porch that are going to be hauled off soon. Whatever animal was out there had discovered them, probably curious about the nesting material and mudden the red squirrels have been busy with.
I stayed with my writing and eventually the animal tromped off and I continued my work, completely forgetting about the entire incident.
Half an hour later, DM (which we’ll say stands for Dog Musher, because she is one) called from Milepost 22w. “Katey! The northern lights are out! They’re incredible!” she exclaimed.
“Awesome,” I said. “I’m putting my hat on now. I’m going out to the road so I can get away from the trees.”
“Ok,” said DM. “They’re more to the east this time, but it’s across the whole sky. You’ve got to check I out.”
We hung up and with my headlamp on high, I leapt out the front door and started jogging down the driveway.
I didn’t get far before the beam of my headlamp caught four gigantic legs, then two fantastic, reflecting eyes. A moose. Bigger than a car, smaller than a garage. Taller than a horse, wider than a cow. The “most dangerous animal in Denali” if you ask any ranger, and it’s true. They’re huge and unpredictable and they like to stop and charge and hurl. This photo from Google Images demonstrates quite nicely just how much space a moose can take up in a narrow gravel driveway such as the one I was walking on: 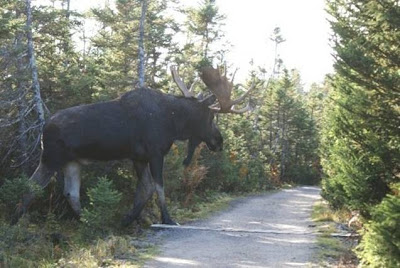 [Google Images, 8-foot tall moose]
I clicked off my headlamp and froze. For a moment, the image was perfect: A fantastic, black silhouette of a moose and spruce trees backlit by a pulsing green band of the northern lights. Does it get any more post card perfect than that? Well, yes, it does. It’s more post card perfect when you’re not standing thirty-five feet from a moose you’ve just startled and instead you’re holding the lovely photo in your hands. But still, the image emblazoned on my mind and then I started singing.
That’s right. I clicked my headlamp back on and sang “Ship Out on the Sea” by The Be Good Tanyas. It’s the first thing that came into my mind. More specifically, the following refrain: Love is a feeling like a warm, dark stone. Love is a feeling like a warm, dark stone.
The moose walked a few paces toward the edge of the driveway and started munching on the vegetation, it’s wide eyes still reflective in the beam of my headlamp. I backed away and kept singing, then finally turned off my light and sat down on the porch. I could still see the northern lights from there, but it wasn’t as spectacular.
Twenty minutes later, I tried again, singing loudly and tossing rocks as I walked down the driveway. It was the moose or the northern lights. What can I say? When you’re not used to seeing the northern lights, it’s easy to think that it’s there just for you. It’s impossible not to be lured in by their spreading, colorful, lighted magic. I walked eastward until I heard the moose again, then clicked on my light and repeated my retreat.
An adventurous night indeed!
Showing 3 comments