It’s been six weeks since I’ve been in a city, which might explain why I’m totally flabbergasted by all the cars in the middle of the afternoon. Where could this many people possibly be going? Then I realize–Oh yeah. This many people actually live here.

The population of Anchorage is about 350,000, the largest of any city in the state and about half the population of all of Alaska. Fairbanks has 150,000 and Juneau around 30,000. From there, numbers drop drastically.
Once you leave the city limits you can head north into the interior, hit the Matanuska-Susitna glacial valley, or the fjords of Price William Sound pretty quickly—two other areas that hold this naturalist’s interest as well. But for now, I’ll keep it urban by focusing on two major land features in Anchorage that always strike me: upland forest and tidal mudflats. In Barry Lopez’s Home Ground, author John Keeble defines an upland forest in the following way:
Upland seems to have been a nautical term, referring in general to the country lying away from the sea, or to the interior and higher part of a landmass, perhaps far from coast. The gradient from coastline to upland may be sudden, as it is with the Chugach Range and its spruce forests of south-central Alaska, or gradual in the extreme, as in localities along the Gulf Coast…Differing weather and soil conditions, and differing levels of exposure to the “elements,” produce upland forest growth distinc from that of the lowlands…
All of which goes to explain why I can be strolling in the park downtown and see this: 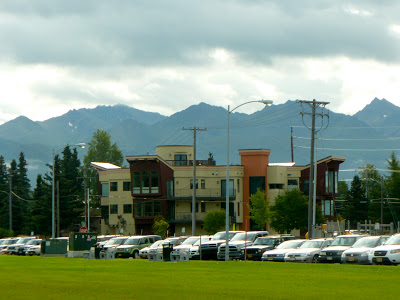 [Chugach Mountains, downtown Anchorage]
Then walk along the Coast Trail a few blocks away and see this: 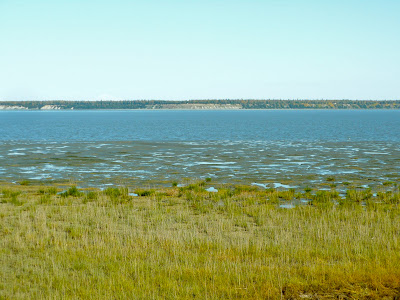 [Puny example of tidal mudflats]
It doesn’t look like much, but these mudflats are a mere sampling of the vast expanses of mudflats that follow the Turnagain Arm and much of Alaska’s Cook Inlet. It’s easy to think that on a dry day, one could stroll the beaches or lie in the sun. Not so. These mudflats mean business, as Home Ground contributor Stephen Graham Jones explains:
A mudflat along a coastline is a level area of fine silt continually exposed by low tide, never quite drying out before high tide returns; it’s usually associated with or sheltered by coastal estuaries, sand pits, shingle bars, barrier islands, or cheniers…In either case—fluvial or marine—a mudflat is characterized simply by a big, flat, often bad-smelling expanse of mud, one that, because it strands insects and small animals, tends to draw birds (though in the case of Olympia, Washington, the local mudflat draws Evergreen College’s graduating seniors for a nude race)…A marine mudflat stays wet year-round, sometimes even—as happens in Alaska—trapping the occasional person in a suction grip while water steadily rises. The trick in that circumstance is to run a stick or handle down your leg and move it sharply to the side, allowing enough air in to break the suction. And then take your stick with you, for the next step. 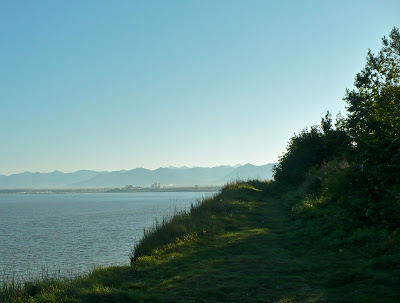 [View of downtown Anchorage from Coastal Trail. The college friend I’m staying with lives right in the heart of those tall buildings bathed in morning light.]
I went on a 20-mile bike ride this morning, following the Coastal Trail south along Knick Arm, past Bootlegger’s Cove and Point Woronzof, all the way out to the “Sports Park”—a series of dense, interwoven mountain biking trails and a Disc Golf course, among other things. For me, it wasn’t so much about these offerings as it was the views along the way. 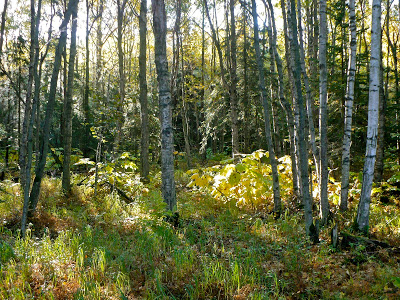 [On the left side of the bike path, a lovely stretch of boreal forest glitters in the morning light. I love the crisp greens and yellows, just barely past the peak of fall. I seem to be staying in a perpetual state of autumn, hitting the far north White Mountains and tundra at their peak, cruising into Denali for the peak of the quaking aspen, and re-entering Anchorage where the leaves are still hanging on.] 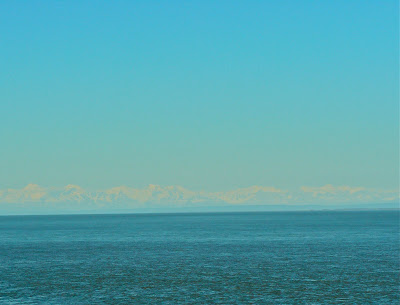 [Views to the right look across the inlet toward the epic, almost hard to believe, Alaska Range in the distance. It’s hard to think I was there just yesterday!]
Tomorrow: Onward to my friend’s “vacation home” in Girdwood and a day hike in the Chugach Mountains!