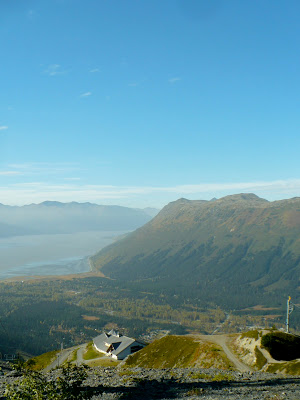 We wake, drink a liter of water each, consume approximately 25 grams of protein at breakfast, and hit the trail. No day packs. No water. Just running shoes, tight pants, and tech tops. So, this is what it’s like? I can do this, I know I can. (I repeat this to my knees, too, which are fairing better than I thought.) It’s only 5 miles to the top of the mountain from where we are and 2 hours later we’re at the top, along with a slough of tourists who have—I learn—taken the free cable tram from the ski resort to the top of the mountain. 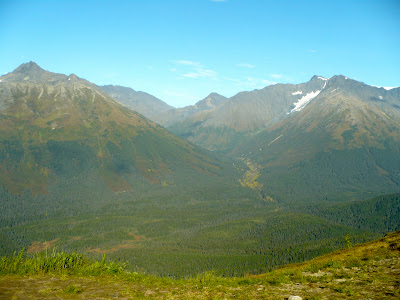 It’s a glorious day overlooking Turnagain Arm and the fjords in this rainforest climate on the coast. I see goat’s beard hanging moss and the healthy, drooping boughs of pine trees The white spruce here are ten times wider than those in central Alaska. I see Dall sheep and there’s a report of a black bear. A few blueberries still cling on, and the crowberries burst in my palms. 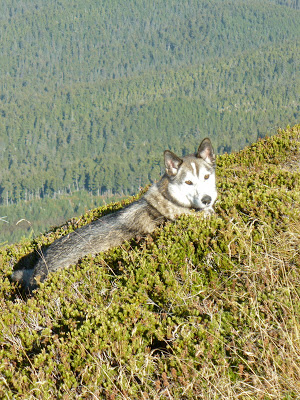 [This wouldn’t be an Alaska hike if we didn’t bring along four-legged companions, in Compton’s case that means Comet and Lula, the latter has my heart and is pictured here, at ease, on the bluff.]
Near the top, I catch a glimpse of this cirque of mountain peaks and glaciers. On the eve of leaving The Last Frontier, it’s hard not to feel a sense of sadness. I’m eager to get to the next thing and there are certain parts of this trip that have been quite difficult. But I also know that as soon as I step onto that plane tomorrow, every ounce of me will be feeling a magnetic pull northward until I can return again to Alaska. 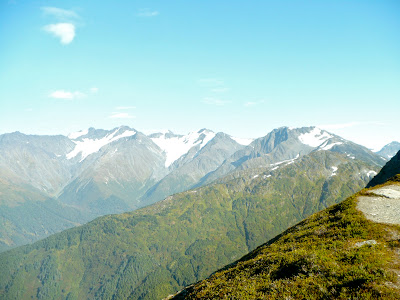 It seems fitting to offer another Rockwell Kent quote at this juncture. When he refers to “we,” he means himself and his 9-year-old son with whom he spent the 9 months on Fox Island with, not too many miles from where I am right now. While I feel he may give himself too much credit in this excerpt, it’s the spirit of his message that I take the most meaning from. Rockwell says:
“Above every other thought now is the sad realization that our days on this beloved island are nearing an end. What is it that endears it so?…It seems that we have both together by chance turned out of the beaten, crowded way and come to stand face to face with that infinite and unfathomable thing which is the wilderness; and here we have found OURSELVES—for the wilderness is nothing else. It is a kind of living mirror that gives back as its own all and only all that the imagination of a man brings to it. It is that which we believe it to be. So here we have stood, we two, and if we have not shuddered at the emptiness of the abyss and fled from its loneliness, it is because of the wealth of our own souls that filled the voice with imagery, warmed it, and gave it speech and understanding.”
Comments