Weymouth Center: Calling Forth the Ghosts 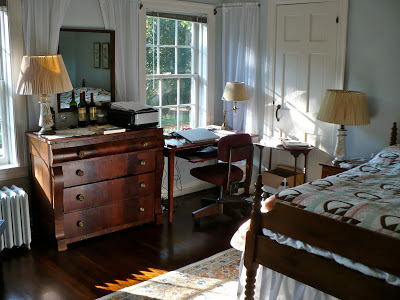 [Partial view of the Paul Green Room, where I’m staying for 4 weeks]
Even before anyone mentioned the ghosts, it occurred to me that I might have seen one at Weymouth. Mind you, I’ve never seen a ghost before and I’m not sure I believe in them. But as I was moving into the Paul Green Room (my bedroom) Saturday afternoon, a gray reflection darted back and forth across the window. I paused and looked around for anything that could have caused it. Then continued my work. It passed again, just as slowly. I paused again and watched as the reflection pass a few more times.
The next morning, a former writer in residence told me he’d seen the ghost of a young woman who killed herself in this mansion. “She was completely friendly,” he said. “She appeared in my bedroom and was just sort of checking things out.”
On Sunday night, my first time completely alone in the 9,000 square foot mansion, I heard pots and pans clanging erratically in the kitchen beneath my bedroom. That’s them, I immediately thought. That’s the ghosts in the kitchen. Then almost as quickly: Ghosts? I don’t believe in ghosts. I fell asleep without a problem.
By Monday morning, I was talking to them. I opened my bedroom door, stood in the hallway in my pajamas and said rather obstinately: “I know you’re here. I’m here too, and I’m going to be here all month. So we need to meet. And there should be a proper way to do this. And it should not involve giving me a scare.” Then I brushed my teeth and set about my day, hard at work revising stories in the St. Andrews Room. 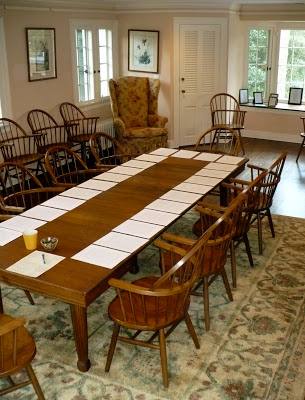 [The war stories arranged along an antique table in the St. Andrews Room, where I’m completing my final revisions using…yes…trusty old pen and paper, along with oral recitation and lots of pacing.]
Monday afternoon, a historian visited Weymouth and spent the afternoon sorting through some of the estate archives.
“I hope I’m not disturbing your writing,” he said as we passed in the hallway. He had a soft face and a sweet, Southern accent.
“No, not at all,” I said. “In fact, it’s kind of nice to have the company.”
He smiled, the hall lights glinting off his forehead. “You mean other than the ghosts?”
I smiled, too. “Yeah, I’ve been hearing about that.”
“They’re completely friendly,” he said. “There’s a truly lovely one who haunts the fields by Weymouth Woods. And lots of writers who stay here have had experiences in this hallway.” He pointed to the stretch of hallway between the Thomas Wolfe Room and the F. Scott Fitzgerald Room, my room being smack dab in the middle. 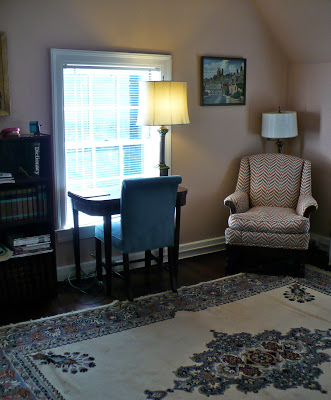 [F. Scott Fitzgerald Room, partial view]
That night, I grew brave and turned off almost all the lights in the entire mansion. I waited in the hallways. I looked for reflections, for wafts of light. It wasn’t pitch black because there are numerous windows and lots of lights around the grounds, illumination the hallways and lace curtains. I studied the hanging tapestries and curtains, waiting for ghost-breezes to make them move and sway.
Nothing.
“Goodnight,” I called to the ghosts. “Sleep well.” Then I closed my door.
In my dreams, I crawled through the Weymouth Woods army-style, my elbows rubbing raw from the brawny longleaf pinecones. I awoke suddenly, wiping imaginary dirt from my forearms. A woman screamed into the night: “NO!” she shouted. Dogs began to bark. “No, no, no!!!” I rubbed my eyes and checked the clock, 6:15 am. The first rays of dawn had turned the sky a slate-tinted lilac, but by and large it was still dark out. More dogs barked and the woman screamed again, a bit unnerving. “No!” she shouted, clearly from somewhere outside.
I leapt from the bed and scanned the grounds from my windows, but couldn’t see a thing. It sounded as though she was right there, just beneath the balcony. Dogs barked once more and a shrill cry echoed across all of Weymouth: “STOP IT!” she cried out in two, quick syllables; then everything fell silent.
“So. You’re here,” I said to no one, to someone, to everything, to nothing.
This afternoon, I found a display of poetry written by former writers in residence, whose words seem a fitting conclusion for tonight’s post:
A Week at Weymouth by Susan B. Katz

Funny,
I had thought this place
to be a retreat
silent
the only sounds
perhaps that of
magnolias dripping,
or longleaf pines
letting loose their needles.
What I hadn’t counted on
was the nightly clacking,
the ghost of Jim Boyd
alive at the typewriter.
And furthermore
ducking the downright regular
hailstorm;
poems falling from the sky.
___
Correction to 10/4: “Not all those who wander are lost,” is actually a Tolkein quote. Being a native of the PacNW, I’d assumed the hippy wisdom came from my first encounter with it, Jerry Garcia. I should have known a writer said it first…and a darn good one at that.
Showing 5 comments