Weymouth Center: Welcome to the Mansion 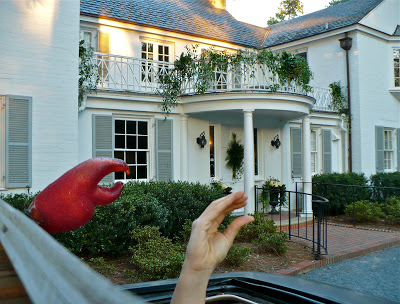 [I have safely arrived, a nearly impossible task if it weren’t for THE CLAW and it’s determined grasping for the next great thing.]
Never mind starting with a 16-hour flight delay, the cancelled second leg of my trip, picking up my car in Michigan to drive 170 miles into the night, then driving 720 miles the next day, another 250 miles a few days after that, and finishing it all by getting a cold. Never mind that the Carolina mountains look furry, their soft, green slopes as inviting as a warm blanket compared to the rocky ridges of Denali. Never mind, either, that I have no less than 13 days to finalize two fiction manuscripts for submission…
Never mind all of it, because Weymouth Center for the Arts & Humanities beckons a kind of even-tempered approach to the writing life that finally, after too many days on the road, convinces me to settle down. I arrive on an 80-degree afternoon to this Southern mansion known as the Boyd House, former family home of novelist James Boyd. It’s my duty and privilege to serve as Writer-in-Residence here for the month of October, part of the reward for winning last year’s Linda Flowers Literary Award. 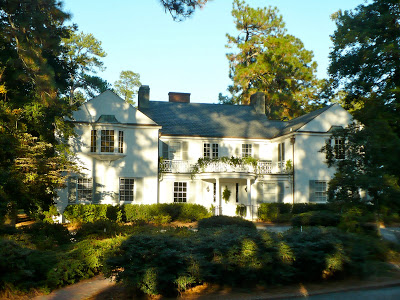 [Front view, for a full view click here.]
Weymouth is situated on 22 landscaped acres, sharing a property line with Weymouth Woods State Park (an additional 1200 acres). The Boyd House is a 9,000 square-foot, 20-bedroom mansion where F. Scott Fitzgerald, John Galsworthy, Sherwood Anderson, and Thomas Wolfe (among others) stayed as guests in the 1930’s and 40’s, installing the place as a literary center. The entire second floor is reserved for Writers-in-Residence and includes a library and the North Carolina Literary Hall of Fame, from which I am writing now. 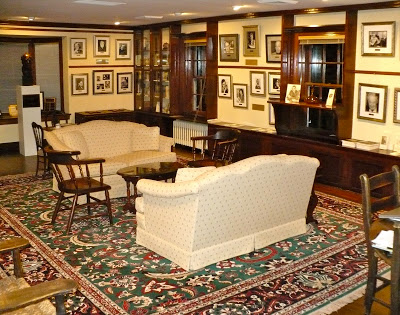 [NC Literary Hall of Fame, partial view]
The original mansion was actually divided in half between two brothers and the other half sits across the street from here, housing the Moore County Arts Council. What remains as the Boyd House today is actually 3 houses pieced together resulting in an unusually long, two-story, high-ceilinged structure registered as a National Historic Site. Complete with creaky floors, ornate antiques, glass-cased built-in bookshelves, and endless narrow hallways, I’m told that even though I’ll be the only person living here for most of October, at least one ghost makes a regular appearance even to those of a skeptical nature. 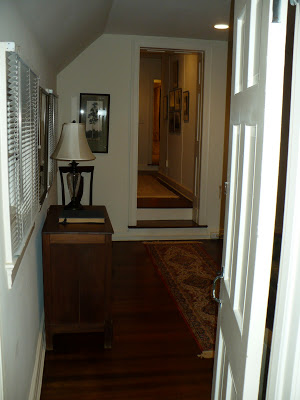 [The hallways just keep going…and going…and going…with offshoots to the left and right, side rooms adorned with Southern antique furniture, wall after wall of framed artwork, and rugs and china you wouldn’t believe.]
All of that is to say nothing of the grounds, which are woven with stone pathways, elegant arches, artwork, ponds, unique flora, and myriad songbirds. 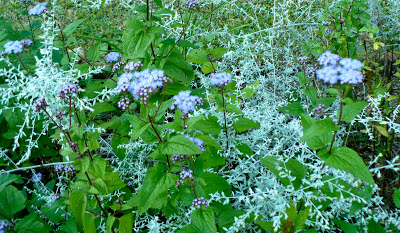 [A male cardinal fluttered his bright red wings in the dense garden shrubs as I approached this blooming purple flower.] 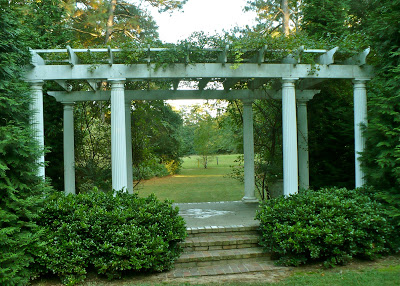 [Like the hallways, the grounds just keep going and going…] 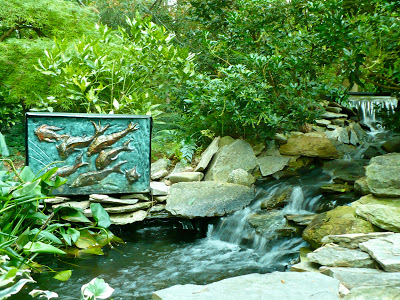 [Is this place for real? Yes, yes it is.]
Stay tuned for adventures in Southern living, including features on literary rock stars, historic southern women of influence, the wooden chairs of Weymouth, coverage of events sponsored at this location, and much, much more.
Showing 3 comments