This fall, I spent 6 weeks in Alaska. During that time I clocked about 100 trail miles (walks, jogs, hikes, backpacking), 100 bike miles, and almost 1,000 miles by car. Less than 24 hours before I left, I was jogging down Alyeska Mountain with a friend and I rolled my ankle. No big deal. I roll my ankle frequently. I gave it a minute, took a few steps, and kept on jogging down the mountain. That night I took an Aleve and used arnica gel. I had no pain, no swelling, and no bruising.

The next morning, the muscles around my ankle felt stiff, but nothing else. I left the Chugach range, headed back into Anchorage, dealt with a 16-hour flight delay, and finally got on the plane. Three thousand miles by air and 1,100 by car later, I was at Weymouth Center in Southern Pines, NC. I went on long walks, joined the local gym, and kept up my martial arts training, all the while noting the awkward tightness in my foot that had migrated from my ankle down to an oddly shaped protrusion on the side of my left foot.
By mid-October I travelled to South Carolina for a weekend martial arts symposium—an event I had been training for no less than 9 months. While there, I was promoted to Ikkyu (the seasoned brown belt rank just before black belt in Shuri Ryu Karate). I worked hard and didn’t have too much close contact, but did in fact spar some with other practitioners.
By the time I got back to North Carolina for the remainder of my stay at Weyouth, I could hardly walk from my car into the grocery store. Some days I felt like a gimp, others I felt almost normal. Some days, the bump on my foot looked spooky, other days it was hardly there at all. I kept up my regimen at the gym, but only when it was pain free…and I called my family’s foot doctor for an appointment. 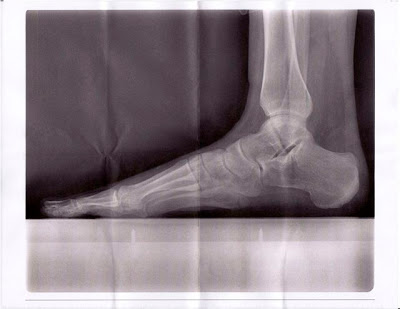 [Ok, so it’s hard to see with a low-res file, but…the bottom bone about 2/3 of the way across the page from left to right is the 5th metatarsal at the point of the fracture. See that line running up/across the light grey bone? That line that runs almost 3/4 of the way through the entire bone? Yeah. That’s not supposed to be there.]
I’m not sure I can describe the look on the doctor’s face today as he told me that I’d been walking around for 5 weeks with a 22 millimeter (about 2 cm) long fracture across the 5th metatarsal of my left foot…but it was basically something between shock and awe. “I’m a runner,” he said. “And you must be one tough woman to roll your ankle on top of a mountain and just keep on running.”
“It didn’t hurt,” I said.
“I understand that,” he told me, shaking his head. “But…wow.” He tapped the end of his pen on the the XRay. “You’re lucky,” he said. “Most athletes with this injury get it higher up on the metatarsal. It’s called the ‘Jones fracture’ and it requires surgery for most folks. Your fracture has already started healing.”
“Sweet!” I said.
“But it’s never going to be right again unless you rest. And I mean rest.”
Long story short: I’ve got a cast on for the next 6 weeks (minimum) and am restricted to no cardiovascular activity. No standing or walking unless absolutely necessary. That, much to my dismay, includes no snowshoeing next month when I fly to Wymoing for the residency I’ve been anticipating for over half a year. Picture it: an avid hiker and outdoorswoman nestled on a high alpine ranch with six other artists, a set of broken in boots and shiny snowshoes, rolling hills of white as far as the eye can see, and not a damn thing I can do about the broken bone in my foot but R-E-S-T.
Perhaps I’ve been pushing too hard? I’m horrible at sitting still…and yes, I actually cried in the doctor’s office.
Meantime, I head back into the McDowell County schools tomorrow to try and teach 100 5th, 6th, and 7th graders while sitting down and keeping my foot elevated. I’d prefer to cancel the whole gig and stay home, but I need the money to pay for, for starters, my $325 cast. This, I suppose, is all a part of life on the road from 2010-2012. Here goes nothing…
Comments