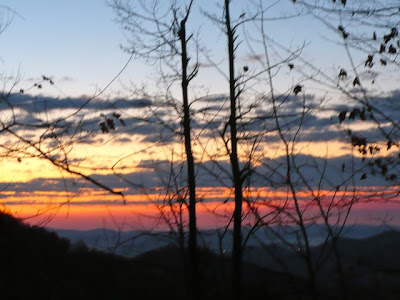 [Not every teacher gets to say this is their view for the morning commute…but if you teach in Western North Carolina, chances are pretty good you get to encounter something like this more often than not.]
On Friday, I spent my last day with the 5th, 6th and 7th graders at one elementary school in McDowell County. We’d worked from free-writes and prompts all week. We studied onomatopoeia, simile, and the 3D’s of story writing (detail, dialogue, development) that make a story “three-dimensional.” We studied the five senses, stanza breaks, and line breaks. We even talked about creating a “moment of uncertainty” in a story or a poem, and looked at examples of what that might mean. When it was all said and done, the kids had five or six starts to stories or poems and a mini-lesson in public speaking. 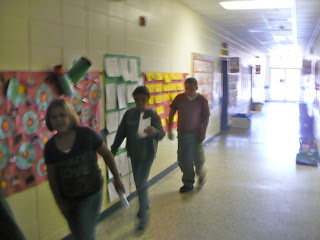 [All but one class held their Open Mic in the school auditorium, but in order to walk down the halls without all of them racing ahead of me, I asked the students to limp with me. They loved the idea, hamming it up as we hobbled in a single-file line of 25 “limping” students bemoaning their “broken” feet.]
Every single student from every single class read their “best work” from our writing time together. For some, that meant a 4-line poem. For others, it was a typed 3-page story. For most, it was something around one page that included some element of magical realism in it. Almost all pieces had at least one simile. Most had several. Some of the more successful attempts included:
The birds filled the sky like confetti on the 4th of July.
The city street looked as crowded as four elephants trying to ride a bicycle.
His blood looked as red as a strawberry.
Or Jordan, 7th grade, who told me he “doesn’t get” poetry, surprised us all when he boldly read his poem to his classmates:
Rain

I opened my eyes
and looked up at the rain
and it dripped in my head
and flowed into my brain.
And all that I hear as I lie
in my bed is the
slish-slosh of the rain
in my head.
Ranging in all sizes, skill levels, and levels of engagement, the students read as the minutes ticked by. By the end of the day, I’d listened to over 90 student stories or poems. More importantly, more than 90 students go to experience first-hand the joys and challenges of sharing their work, reading confidently, and being attentive audiences members.
Some needed extra encouragement… 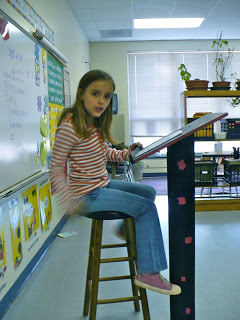 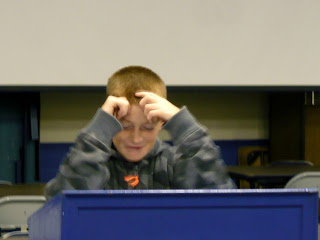 Others stood tall and proud, no matter their stature… 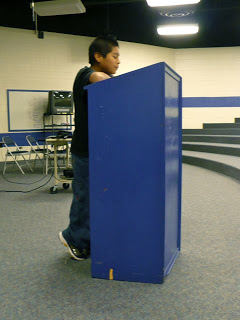 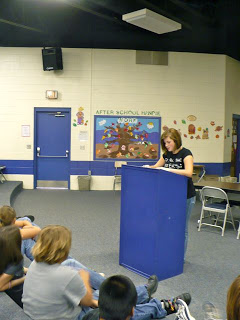 And Toby, who wrote about a boy who goes on a walk and meets Big Foot, learned that he has a knack for humor… 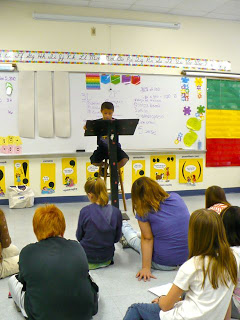 In Toby’s story, Big Foot can talk like a human and lives in a house. Big Foot serves the boy raw venison and tells the boy all about his life. It turns out, we learned as we listened to Toby’s story, Big Foot is half human and is married to a yak that lives in the Himalayas. Big Foot and the yak are separated right now because “they got in an argument about their marriage.” They have three kids named Little Foot, Middle Foot, and Large Foot.
Toby’s story went on…and in the same vein I hope the creativity of those students goes on as well. This week? I’ll be doing it all over again at another McDowell County elementary school. More shining faces and imaginative stories await, so stay tuned! 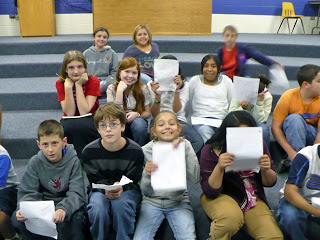