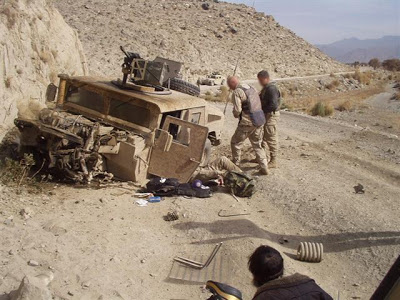 [Today’s kids know what an IED is…]

Tuesday night, the fellow residents of Jentel will be giving a reading and presentation in downtown Sheridan, Wyoming for the monthly Jentel Presents series. I was instructed to come up with something to say about my own creative process. Since I only have 10 minutes, including time to read a story, I had to be really succinct about the war writing. It was a good exercise, although I feel there is a lot more I haven’t said that needs to be touched on. Food for thought…For now, here is the narrative I will read before sharing some war stories with Wyoming’s finest:

It’s difficult for me to pinpoint the exact moment my obsession with the United States military took hold. I left teaching for 5 years and when I came back part-time as a writer-in-residence, I was struck by the fact that teenage students had assimilated the language of GWOT, the global war on terror. Today’s kids know what IED’s are. They know what water boarding is. They can talk about Osama bin Laden in the same breath as the corndogs on that day’s lunch menu.
I’ve always been drawn to moments of disconnect; that jarring second in life when we struggle to reconcile one idea with another: Osama bin Laden and the cafeteria, iPods and IED’s. What are the consequences of the neural pathways being formed by this language? Words, after all, are my primary tool as a writer. I take their evocative power very seriously. I wanted to trace these moments of disconnect to their source, so I started reading military reportage and firsthand accounts of combat. I interviewed veterans and recruitment officers, watched war dramas and documentaries. As someone with no personal or professional ties to the military, I had a lot to learn.
Throughout the research, inspiration for short stories usually came to me in two ways: quotes or images. One example that comes to mind is a series of YouTube videos I watched with embedded reporter Ben Anderson, who travelled through Afghanistan with U.S. and British troops. In one interview, a soldier looked into the camera and said, “America’s not at war. America’s at the mall.” I was struck by the contrast and cadence of this—the war, the mall—and wrote my first war story titled, “While the Rest of America’s at the Mall.”
I plastered my studio walls with quotes and photos. I used Google Images and Google Earth to study terrain and try to “visit” two countries I’ve never actually been to. I looked up weapons, order of military rank, Arabic and Pashtun terms, colors of uniforms. The list of new phrases at my disposal seemed endless: fobbits, ripped fuel, hot brass, haji, raghead, cleared hot, pogues, yalla yalla, got your six, pressin’ the flesh, pack your trash, get some, stay frosty, hillbilly armor, death blossoms, 0-dark-hundred. Likewise, primary accounts from civilians were evocative as I attempted to write from the Iraqi or Afghani perspective: “Since my brother was killed, I cannot taste my tea;”  “I am but one fistful of dirt;” “There is no law. The gun is law;” “Tomorrow or the day after, we will be martyrs;” “My son wanted a notebook. He wanted a notebook and he was killed.”
Almost all the pieces in the collection are what I’d call “flash fiction,” or very, very short stories that capture a moment in time. I brought a few of the shortest ones to read tonight.