0
1
[This is a really, really long post. Click “Read More” if you want to read more than what’s visible on this screen…and especially if you want to hear about the ghost heard of elk, whose mystery continues to unfold.]
I extended my research a little beyond the lake this week, reading about the history of the town of Joseph, studying the waterways on my topo maps, and getting a better sense for where the Nez Perce actually were in this country (as compared to where, nowadays, the reservation is). I even found a book published by the Nez Perce tribe that offers the Indian perspective on their displacement, and why the Wallowas matter so much to their way of life. Here’s a scanned copy of their “diminishment map” (Wallowa County is in the uppermost right hand corner of the state of Oregon): 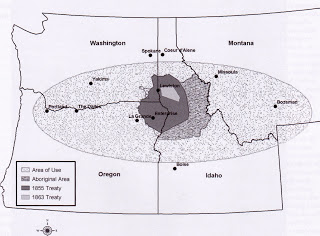