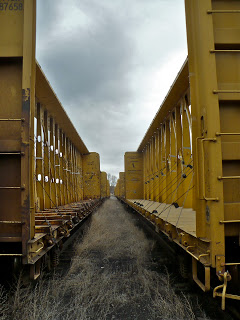 I went looking for the past this weekend, walking the old steel rails through downtown Enterprise, where in 1908 the first steam engine visited the valley. By 1966, most depots that residents had lobbied so hard for in the first place, were closed. By 1996, the last freight car left Wallowa County for good. Nowadays, what survives during tourist season is the Eagle Cap Excursion Train, thanks to concerned local historians and approved County monies.
The ancient, abandoned cars get to park here for something akin to $1 million dollars per year, money this County can surely use despite the eyesore. They might block views, but after walking alongside their steal skeletons, it’s hard to deny the sense of history and narrative these unloaded cars afford.
Imagine living at time when the automobile was recently invented, streets were unpaved and largely used by horse-drawn carriages, and a rural county’s growth was dependent on the availability commuter and freight cars. It’s hard to imagine what today’s equivalent might be. Perhaps it is rural counties waiting for universal access to high-speed Internet and cell phone service, the wireless equivalents of “travel” by today’s standards. With Internet access, you can travel anywhere in the world. In the early 1900’s, one has to believe that pioneers who crossed the Rocky Mountains and homesteaded in the rugged Wallowas believed that a three-hour train ride to La Grande, Oregon was just as revolutionary. 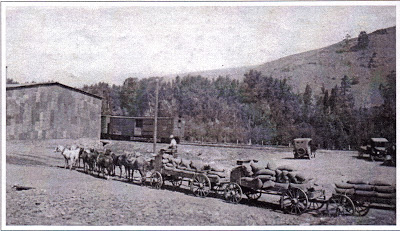 I’ve been reflecting about how study of place influences my writing process. I’ve been in Wallowa County for one month and my nonfiction has already benefitted–not just in terms of knowledge gained, but in terms of exercising the writing muscles of compaction, creative selection, summary, and seeking out narrative. Incidentally, all of these techniques are employed in fiction (though with sometimes slightly different names). Doing place-based research kills two birds with one stone, then: feeding my curiosity and providing blog content while simultaneously helping me become an all-around better prose writer. I wonder what other writers choose as their muse? Fellow Blogger and friend Kyle Lang, reclaims the WTF label in his blog, exploring themes of writing, teaching, and fathering. How do you do it?

This week I’ll be exploring those cars and the history of trains in the Wallowa Valley. I hope you enjoy the ride!