The United States Postal Service was officially established in 1775. Within a year, 28 post offices dappled the nation, mostly on the east coast. One hundred twenty five years later, the United States claimed 76,945 post offices. But even still…when in 1869 the USPS began offering house-to-house mail service for cities with more than 50,000 residents, the territory now known as Wallowa County technically didn’t even exist yet (it was still a part of Union County).
Mail was still delivered, of course, officially or not. But at times it took more than six months for a single correspondence. And around 1885, when the first post finally did open in the officially drawn Wallowa County, the population was just 3700 for almost as many square miles of land. 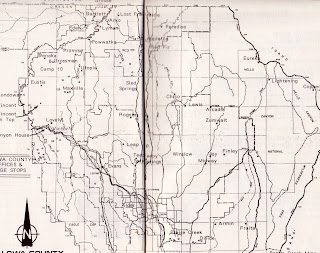 [Early map of Wallowa County “towns” with post offices. Joseph and Enterprise, where I’ve lived, are in the “fold” of this book’s pages, about 2/3 of the way down the center of the image.]
Parcel Post Service began in 1913 and, just nine days after initiation, the Wallowa Sun newspaper reported:
A nice fat baked hen, ALL BROWN AND JUICY was one of the articles that left the Wallowa Post office last Sunday by way of the parcel post. “Tod” Maxwell was the sender, and it went to his father-in-law at Sumpter. Wallowa people are taking well to the new parcel post, and have made us of it since the first of the year.
About the same time Parcel Post Service fired up in Wallowa County, a band of robbers wandered into the unincorporated town of Evans (now subsumed by present-day Lostine, which isn’t saying much) and set their sights on the post office. As the Enterprise Record Chieftan reported:
Alfred Minnick was shot and dangerously wounded Monday night by one of the five burglars who robbed the Evans post office and store of the Oregon Cooperative Association. He had a marvelous escape from instant death and owes his life to the fact that his assailant, in the dark, and only a couple of feet away, held his pistol so that the bullet glanced off…The Evans post office was robbed and thereby the wrath of the United States Government aroused. The government offers a standing reward of from $200 to $1000 for the capture of a post office robber. The department will continue its hunt for the burglars for years if necessary, and it seldom fails to get the men wanted.
Of course, the robbers were caught the next afternoon, foolishly hiding in the brush near Minam. Before the robbery took place, Postmaster Minnick had spotted the suspicious characters loitering in town and stashed all the money from the store and post office elsewhere, still risking his life but not losing a penny of postal dues.
Back then, chances were just as good you might send a letter from someone’s kitchen (who doubled as a postal worker), from an old log shack, or anything in between. For example: 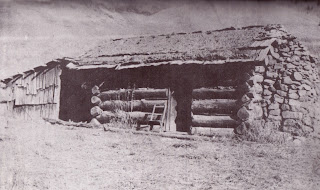 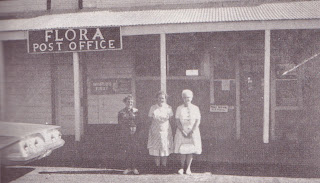 [Downtown Flora, postmistresses and all.]
It seems only fitting to end with what is, as far as I can tell, a photo of Frank McCully himself—the youth who founded the town of Joseph so many years ago. Here he sits as an older man in 1936, riding the “Thomas Flyer” which was used to carry mail between Joseph and Wallowa. The Joseph postmistress, Eva Rumble, sits in the back seat dressed in dark clothes. Frank McCully is in the front, middle seat (to the left of the man that is standing), wearing a light-colored hat. 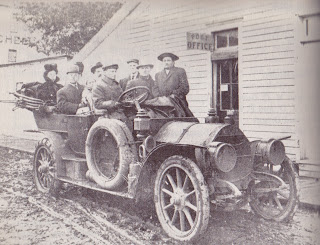 [Post Office in Joseph, Oregon, 1936]
Stay tuned for more snippets on early post offices and schools! (And I haven’t forgotten about ghost towns…I’m just still looking for someone to help me “tour” some. It’s hard to go looking by yourself for something that isn’t there anymore.)