Last week’s posts were pre-scheduled and written in advance, as I’ve been down at Imnaha since Sunday and therefore without Internet or cell service. But today I’m “out up top,” as they say in Imnaha, to attend to the final duties of my time as Wallowa County WIR. Hello, Internet! Hello endless tasks! I think I liked it better down in the canyon…so without further delay:
[And to clarify, the Imnaha River Canyon is not the same as Hells Canyon, but parts of it are included in the Hells Canyon National Recreation Area and scenic byway. Each is a separate canyon, the latter for the Snake River—which I hope to glimpse soon.]
Weather in this canyon is a force to be reckoned with. One day, I took an 18-mile bike ride further upstream, dodging cattle and the occasional hay truck. The next day, I tried for the same ride but had to turn back due to high winds. Riding only slightly uphill in my lowest gear, I moved at a snail’s pace while wind chapped my face and knuckles. Time to go sit by the fire instead! That afternoon it snowed a wet two inches, but by the next morning the sun found us again!
But sometimes the wind is subtle in the canyon, the only roaring sounds that of the Imnaha River now gushing with spring runoff. One quiet afternoon like that I decided: I want to go up. One of the other writers here tipped me off to an old ranch road and I followed that until it petered into trail, leaving it behind in pursuit of the top of the nearest bluff. I followed cattle trails, made my own trails, and near the highest point I thanked the elk for their broad prints that cleared a way for me—sometimes climbing hand-over-hand—to nearly summit the bluff. I climbed until vertigo hit and I saw a little patch of snow. Clearly, high enough for this solo hiker, but the view about sixty feet from the summit was still spectacular: 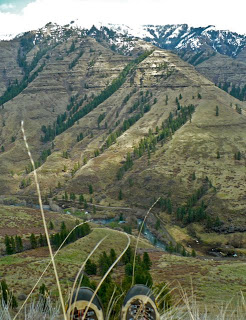 [The Imnaha Writers’ Retreat is located at the bend in the river in this photograph, straight ahead from my right foot and on the near side of the river.] 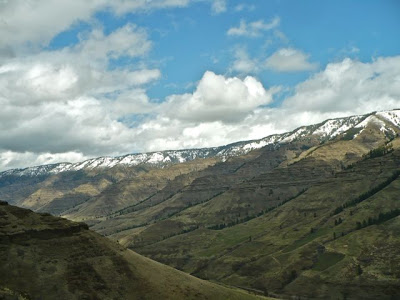 [Bluff hike view looking downstream.]
Summiting a canyon bluff feels different than climbing a mountain. This compelled me to look at my trusty copy of Home Ground for their smart definition of canyon, as composed by Ellen Meloy:
Canyon is a general term with a heady array of specifics. It may be as “simple” as a cleft between steep walls or as complex as the Grand Canyon or Mexico’s Barrancas del Cobre—miles across, layered in their depths like ragged, inverted cordilleras. In the Southwest, canyons are assertive landscapes. Aridity sharpens their bones. Rivers may run through them—open arteries in a carapace of rock; others flow only with blow-sand and chokestones. Canyons come blink, box, side, slot, hidden. They stair down and pour off. They gooseneck. They hang. Muley Twist, Desolation, Snap, Lavender, Blue Canyon, Rain Canyon—canyons are where you want to live merely on behalf of their names. The Hopi word posovi means “canyon corners,” as if one quirky, prismatic facet at a time were all you could manage in this seemingly irrational geography of space and rock.
Irrational arrangements of space and rock. Slot. Pour. Stair down. Yup—that about describes Imnaha Canyon! And the word—pronounce IM-naw-haw—named for a chief whose people once roamed the area. The word itself rolls off the tongue like water, like a rockslide, like…
Showing 2 comments