The first school down here at Imnaha was actually a subscription school in 1884 and was held in a cave on the Vaughn Farmstead. Previously, it is likely that the Nez Perce used the cave.
In 1886, the public Imnaha School was built on 2 acres of A.B. Findley’s 320-acre homestead and it quickly filled with 32 students of varying ages and abilities. The continued overlap between pioneer settlers and the Nez Perce is captured well in this photo of the Imnaha School (or Findley Schoolhouse, as it was sometimes called), which also includes a small group of Indians camped in the yard: 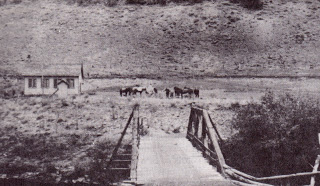 As one historian wrote: “The Imnaha schoolhouse, ever since it was established in 1886, has been the center for community activities. Plays were staged by adults to raise money for fencing the Imnaha Cemetery, bingo games were offered by the Grange to raise money to fence the pioneer cemetery at Grouse Creek upriver; there were flea markets, pie sales, spaghetti feeds, and many other projects to raise money for community causes. It served as a meeting house for business and political purposes, and until recently, for Sunday school and church services, in addition to being the precinct polls for Imnaha voters.” The building was used until it was condemned in 1954 due to fuel leaks. 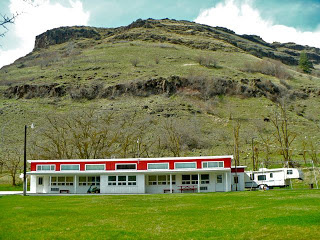 A new school was built in town shortly after. Today, that school only has 2 students and also houses the town’s public library. Surely, it hosts some of the same community activities that the old schoolhouse once did. Across from the school is the Imnaha Tavern & Store, and nearby is the post office. Visitors can then turn left to go downriver or right to go upriver.

No matter which direction you go, it’s usually a long way till you get there.