0
0
One requirement of the Intermediate Creative Writing Majors at Interlochen Summer Arts Camp is to experience “workshop.” For most 6-9th graders, this is a first. They’ve never had their work formally critiqued before by a group of writers, let alone while they’re sitting there in the classroom and can’t say a word. As intimidating as it can be for these young authors, it’s generally also a challenge that they welcome.
The young writer on the left workshopped her poem titled “Morning Sounds” this week, and received feedback that her rhythms were strong but her language could have been more specific. She received suggestions about using consistent punctuation and her peers told her that what they most admired about her work was the feeling created by the poem. 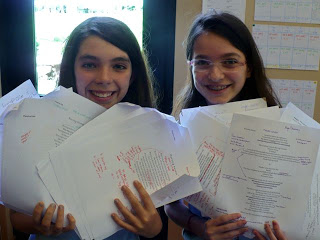 The young writer on the right workshopped her persona poem titled “The Boxer.” Don’t be fooled by her youthful, innocent smile. “I like to write things that make people cringe,” she told me between giggles this afternoon. But she’s got tact and taste, not to mention skill. Consider these lines from “The Boxer,” a still-in-progress poem:
I punch to injure my opponents
I watch blood run down their faces
My gloves of pure red hide the wrong
She received feedback that some lines were too bulky and out of voice, while others were dead-on. Her peers told her that they most admired the way her poem made them feel like they could understand the mind of a boxer for the first time. High praise indeed!
These past 19 months, I have delved so deeply into my own creative process as a writer that much of it seems intuitive to me now. This can be problematic when I teach, because what’s intuitive to me isn’t necessarily intuitive to others—especially younger authors. I struggle, at times, to find just the right exercise to guide writers toward understanding something about their own creative processes. But then I’ll spend a day workshopping poems with an especially skilled group of teenagers and see, hands down: they’re learning. Just look at all the scribbles and notes they’ve written to each other on their drafts! Just listen to the way they talk about line breaks, point of view, “the speaker” (not the same as the author), and the emotion of a piece.
We’re not even halfway through this first session and I’m already proud of my students. Such brave, imaginative minds. Such creative spirits who have, many of them for the first time, started to find a home for their best, most highest potential as the future artists of world.