0
3
It takes almost two weeks,
but it happens nonetheless. The heat, the trash, the homelessness, the prison,
the lack of safety…Houston hits me like a two-ton truck. I can’t leave the
studio at night because we’re near an overpass (read: broken glass, unlit
areas, people down on their luck sleeping in cement hollows). I could go with
Howard, but we’re not often on the same schedule. He is of the city as much as
I am of the Earth. Notions of “missing the stars” or “asphalt anxiety” or
“skyscraper claustrophobia” are foreign to him. We work in a studio with no
windows, my writing loft a welcome façade for a vantage point, but a façade
nonetheless.

I can’t sit outside and
gaze at the sky each night, even next to our own door, because the high-beam
security lights are on a timer. “Where can you go to sit alone at night,” I
asked Howard. “Or during the daytime, for that matter, even in the shade?” He
came up short of any places within walking distance, safe, physically
comfortable, and also outdoors. If I want to walk during the daytime, I have to
suit up, hydrate, then usually nap afterwards. I wear spandex under skirts, go
through a trial-sized tube of Asics Chafe-Free Sports Gel, sit on a sweaty
towel in my un-air-conditioned car, wear my sandals into the shower because
they need to be soaped up as much as my own body.

Even still—I’ve managed to
find my way around town on foot and in THE CLAW well enough. That’s to say
nothing of the fact that twice I’ve
been nearly hit by a car while walking on
the sidewalk. The first was a cop car that came 5 inches from my left hip.
He was making a sudden U-turn and surely on a call, but his nonchalance
perturbed me. The second was a woman pulling out of a parking lot. She got
close enough to hear my Nike’s scramble across the loose concrete and broken
glass and her window was rolled down, so when I gasped, shoving my hand out to
touch the hood of her SUV, she heard that, too. 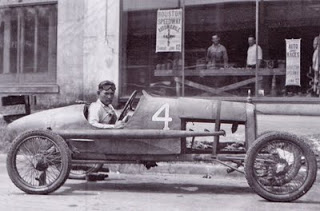 At stoplights, cars rush
forward just to hurry up and wait for the next red light one block later.
Impatient drivers honk if you don’t gun-it-on-green; never mind the blind man in a
wheelchair who’s still in the crosswalk. The city drivers here are perhaps
reminiscing as they cruise along San Jacinto in fits and starts with all the
patience of a toddler. After all, in the 1920’s, not more than 1 mile from Main
Street, the Houston Speedway hosted some of the hottest races of the decade. As
noted in a history book by Story Jones Sloane III, “It was not uncommon to pit
plane against car in the 1920’s.” (Though this car would need its engine back
first.)
Touché,
Houston.
9 of 25 Ways of Looking at Houston: A lovely yet
telling view from a pontoon ride I took on Buffalo Bayou. To the left is
University of Houston-Downtown. To the right is (one of) the County Jail(s).
Those windows are fake. Our studio is 2 blocks from the prison and yes, that’s still the heart of downtown. 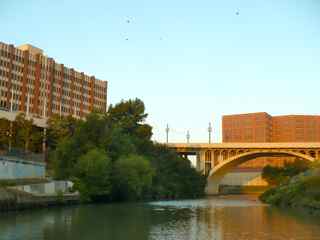