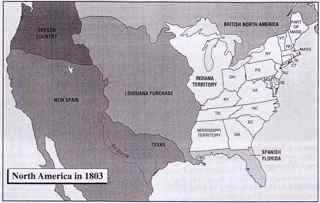 It’s difficult to be in
Texas and overhear discussions about the “illegals” when of course us whiteys
were the illegal ones in the first place. Even though Texas was an unimportant
compared to the rest of Spain’s holdings in the New World, the Spanish would
eventually fight for it. Before the Spaniards came the Indians, who were amply
prepared, according to historian William W. Lace: “Mounted on swift
horses—which they had been stealing from the Spaniards for decades—and using
French-supplied firearms, the Apaches and Comanches would swoop down on a
settlement, carry off loot and prisoners, and be gone before resistance could
be organized. By 1793, after seventy-five years of missionary, the Spanish had
only “settled” 43 Indians.
But even before that, in
the 1540, Francisco Vásquez de Coronado met with Hasinai Indians in what is today
called “the panhandle” and Texas earned its name. The Hasinai introduced
themselves as teychas, meaning friends. Over time, teychas turned to tejas
turned to Texas.
Of course, my time here
begins in Houston, now the 5th largest city in the United States,
just an hour north of the Gulf of Mexico. I’m staying in a warehouse off of San
Jacinto Drive, named for the Battle of San Jacinto, which came after the famed
Battle of the Alamo and claimed the war cry “Remember the Alamo!” as soldiers
went on a revengeful slaughter. 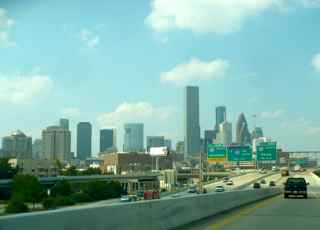 [THE WAREHOUSE SESSIONS
take place in a historic brick building underneath this overpass, in the heart
of downtown Houston.]
The logistics of my stay
are thus: 1 painter (Howard Sherman) + 1 writer (that’s me!) + 25 days (until
my next residency) + 1 warehouse (called The Docks) = THE WAREHOUSE SESSIONS. 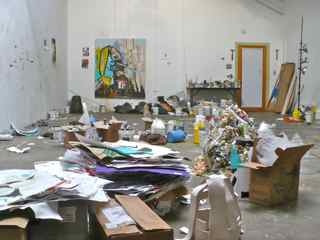 [View from the futon, our “living
room.” This is what it’s like to live with a painter. That, and odd moments in
public when you’re trying to decide which apples to buy and he’s holding them
up to the light, squinting and describing their color to anyone who will
listen.] 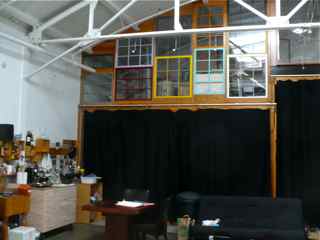 [View from main door. My
writing loft is high up on the far wall where all the framed windows are. The
sleeping area, closet, and bathroom are behind the curtains. The kitchen is on
the left.]
We’ll be doing some daily
collaboration, I’ll continue my place-based writing about the region, and we’ll
also pursue individual projects. Additionally, I’ll be posting 1 photo per post
for a series I’ll call 25 Ways of Looking
at Houston. Stay tuned for more place-based fun, culturally pertinent
essays, and a little urban adventurousness…all brought to you by The Writing
Life Blog. 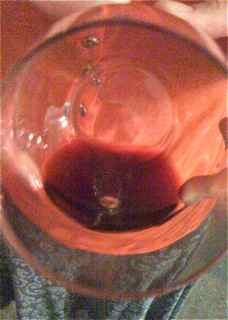 [1 Way of Looking at Houston: La cucaracha en mi
tempranillo! Sorry for the poor
quality. This is a cell phone pic and, as you can imagine, we wanted to get it
over with quickly.]
Showing 7 comments