Rebirth of Our Nationality

0
5
Today I sought out Leo Tanguma’s mural on Canal Street titled The Rebirth of Our Nationality, completed in 1973 during the Chicano mural movement. All of this got me thinking about the place of Mexican Americans in Houston. The inscription along the top of the mural reads: “To become aware of our
history is to become aware of our singularity.” The slogan was used to draw
attention to the Mexican-American struggle for dignity. Let’s remember that before Houston was Houston, TX, USA it was Harrisburg; and before Harrisburg, TX in The Republic of Texas (a sovereign nation) was Harrisburg, it was a colony of the Republic of Mexico settled largely by Anglos (yes, whities under colonial Mexican rule); and before that the area we call Houston was actually part of New Spain, vastly unsettled, boasting not much more than a few monks who “kept” Indians for work and conversion to Christianity. In fact, it seems as though enough power changed hands enough times that practically everyone could have claimed themselves as native, colonist, illegal, or documented citizen depending on the decade.

The black and white photo was taken in 1986 and I scanned it from a history book. The color photo was taken this afternoon. Mural damage is due equally to neglect and
politics (some of Tanguma’s murals in Texas have been completely
vandalized or destroyed by naysayers). According to the Texas State Historical Association, the Chicano mural
movement of the 60’s and 70’s used many public buildings and corridors
to “depict themes common to Chicano muralism, such as mestizo heritage
or social problems, but they also tell unique stories about the ‘merging
of ideas, cultures, and dreams’ along the United States-Mexico border. The word Chicano came into more popular use in the 1960’s as a militant term for la raza (the race). At that time, roughly 10% of Houston residents identified as Mexican- or Hispanic-American. Today, that number is over 40% even though, as many Texas historians are enthusiastic to point out, Houston’s “roots” are Anglo/white. Much of historic downtown was in fact purchased and laid out by the Allen Brothers–two dudes from Brooklyn with a lot of cash. 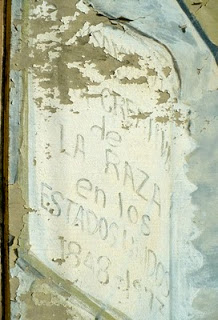