0
0
Across the courtyard from me there’s a writer with a Pushcart Prize. Two walls over? A national bestselling memoirist with a contract for book two with Scribner. At dinner? Poets with more books than I have fingers on my right hand, an author with books being made into movies, and an accomplished professor poet from NC State. Next week, Conrad Hilberry and Masha Hamilton (!!!) arrive. I am a little pea in a garden of talent. It’s not overwhelming so much as humbling. It’s not daunting so much as realistic. It’s not competitive so much as an invitation to rise to the challenge.

My studio wall is signed by Denise Duhamel and Lia Purpura, to name a few. Someone has also signed as Hemingway, to give perspective. Twenty-two months on the road has taught me so much, not the least of which is how to stay the course when surrounded by what, to my little pea eyes, are unfathomable fame and accomplishment. I can be my own coach now. I have the confidence to trust my process in new terrain, to question my tricks at the first hint of boredom, and to understand that the only difference between me and a writer who isn’t published is some combination of good luck and discipline.

Late Friday night, I walked into the living room at the Fellows Residence in as Laurie Foos and Mary Kay Zuvraleff (best writer’s smile ever) debriefed their fevered one-week residency of fingers-to-the-keyboard, pure, hard, work. I wasn’t a fly on the wall. I listened, but I also had something to contribute and whatever it was I said, they cared enough to listen. In a place where a takes a bit of something to get accepted, it’s nice that at the end of the day those somethings don’t actually matter. We’re all just doing our thing, one word at a time. The only difference is, here we don’t have to do it alone.
There are as many ways to measure a writer as there are
writers themselves. Do I look at dedication? Accolades? Fervor? Dollars
earned? All I can hope for in the long run is to publish writing I feel
proud of, to be respected by a respectable audience, and to make a
living as a writer at large. 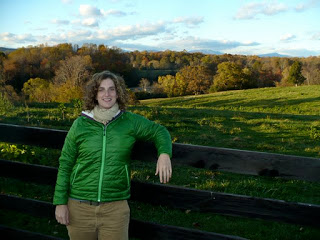 [A little pea in a pea green coat.]