Somehow I’ve failed to mention that Bandera, Texas is the cowboy capital of the world. Once a town of 3,000 it numbers just under 1,000 today with a quaint main street (Highway 16) and a whole lot of “Yes, Ma’m’s” and “Y’all’s.” Living here on Madrono Ranch as an artist in residence, I can drive 25 miles to Bandera if I need vegetables, coffee, or human contact. I already made the trip once and came back with a pair of cowgirl boots. Next time, I might just end up with a vest if I’m not careful.

What’s most striking about this “cowboy capital of the world” is that Bandera County historically supported more sheep and goat populations than it ever did cattle. The crumbly Texas Hills with narrow, short canyons and dwarfed grasses are better suited to these smaller, less damaging herds of animals than to hordes of 800-pound Texas longhorns. Bandera earned its name and kept it, however, because it is the starting point of the famed Western Trail.

Centrally located, this small town is where thousands of cowboys gathered to join the long drives northward, moving hundreds of thousands of Texas longhorns over several decades to along the Western Trail to Dodge City and beyond. You could sell a longhorn for tallow and hide for just $4 in Texas…or you could drive it up the Western Trail and sell it for beef at $40 a head. That’s not to say that once the cattle got moving, cowboys just had to keep them going. The threat of Comanche raids, especially in the mid- to late-1800’s was imminent. 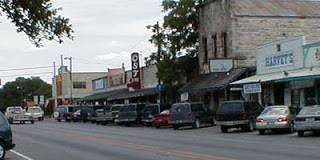 I’m disappointed to say that most of the Texas-published literature I have found on these “raids” still calls the Native Americans “wild” or “savages” and uses violent verbiage to portray their defense of the open terrain, as though “settling” were the only worthwhile human accomplishment. A sign in downtown Bandera describes the Indian presence as a “menace.” A book commissioned by the Bandera Historical Committee and approved by the County Commissioners in 2005 doesn’t do much better than that. Other texts seem to portray these “raids” with a broader understanding of human history–in other words, that history did not begin with white settlers and the concept of agriculture. Still, when I look down the main street of this small town and try to envision all the pride and joy of those hard-working cowboys more than 100 years ago, the romanticism fades a little with the knowledge that history is never written by “the losers” and, more often than not, once it’s written through a particular lens, it’s quite hard to undo.

Cowboy Fact of the Day: Despite countless dangerous creek and river crossings on long drives, most cowboys didn’t know how to swim.