Day 8 VCCA: Getting Out 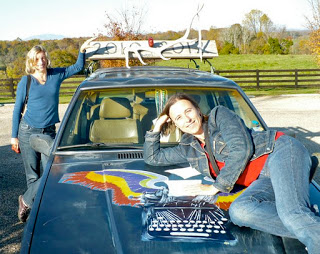 Ingrid Floss is a VCCA Fellow on exchange from Munich, Germany. She’s an abstract painter who uses acrylic and oil on canvas in bold, layered swatches of color. Walking into her studio feels like stepping into magnified spring in full bloom. Likewise, her personality is joyful, curious, contributing. Barbara Krohn is also on exchange from Germany, and she’s best known for her crime novels and translations of poetry from Italian into German. She’s tough, pleasant, funny, and smart. Together, these two brighten my days here at VCCA, the sounds of their fluent-but-accented English like a sweet rhythm all its on. Today we laughed as they tried to say a new Fellow’s name: Karl. Kahl, they said, then looked at each other and mocked the American “r”: Kah-rrrr-llll. More laughter.

And so sometimes you just have to go. Get off the mountain. Mess up the valley a little. Buy some dark chocolate, fergodsakes. I
had a productive morning and by the afternoon I was ready to hit the
road for a few hours of errands. It felt like sneaking out and my two
new friends met me in the lobby at 2pm. By the time THE CLAW navigated
down the steep driveway and hit US 29, we were all smiles.

See the three of us crammed into a Goodwill changing stall, trying on
dresses, the absurdity of polyester or the occasional appearance of a sensible dress. I told Ingrid she would be a “knock out” if she wore
that tiny, blue, strapless dress to this Saturday’s party. She laughed at
the term, knock out, said it out loud. She tried on another dress,
another, another. Meanwhile Barbara found sweaters, one with a slanted collar made of silk and cashmere. Like any Goodwill store, it was a score–just three dollars for the good find.

Afterwards, we went to Food Lion. Like I said–being in an artist colony can make the simplest errands seem like the greatest adventure. We found important things: cocoa powder, discounted Halloween candy, and of course…dark chocolate.