0
3
On Saturday morning I head out for nine weeks of adventure in Alaska. Cold, dark, and snowy–yes–but also wild, quiet, and inspiring. I’m honored to begin my trip as Writer-in-Residence for The Island Institute in Sitka, AK on Baranof Island. The image below marks A) The Island Institute on the campus of Sheldon Jackson College, which is right next to Writer-in-Residence furnished apartment and B) the dojo I intend to train at while living on the island. The locations are 2/10 of a mile apart. 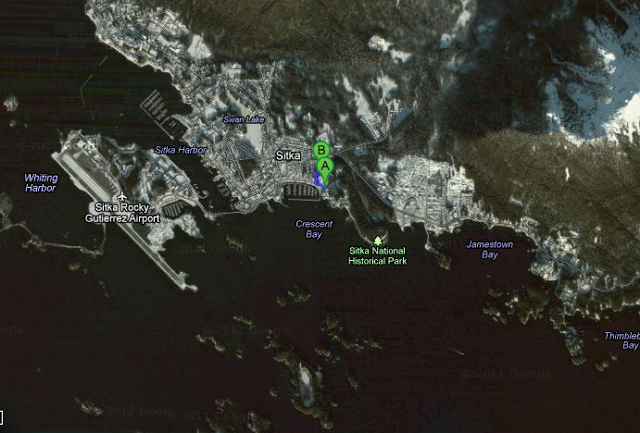 One reason I am so eager to connect with this organization is because their mission aligns with a lot of the issues surrounding my current manuscript, Flashes of War. As quoted from The Island Institute website:
We use the literary arts as a
means of inquiry into the core values of community, and promote
collaborative leadership as an avenue to deepen democratic principles of
civic engagement. The
dialogue we nurture is at once community-based and national and
international in its scope, and aims to identify common ground between
diverse perspectives. Our programs involve
nationally recognized writers, thinkers, and community leaders from the
U.S. and abroad…
The apartment looks like it’s a stone’s throw from the shores of the North Pacific to the west and Sitka National Historical Park to the south, so my interest in the tides and in snowshoeing should be piqued during my stay. I spent September, October, and November generating new material and December doing physical labor and socializing. This winter will be a time for exploring and filling my well back up as I engage with community in public events. Since Alaska is my greatest muse, I can’t think of a better state to be in as I ring in the New Year!
(Interested in previous posts about Alaska? Each of the following links corresponds to the first photo and post for that part of the trip and the others can be accessed by scrolling chronologically. My first journey was in 2009, which led to its own unique series of posts. In 2010 I flew into Anchorage, then spent roughly 2 weeks in Fairbanks with another author, 1 week backpacking in the White Mountains, 2 1/2 weeks in Denali, including time with sled dogs, and 1 week in the Chugach.)
Showing 3 comments