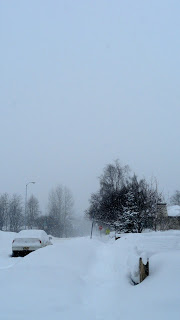 It’s no secret Anchorage has seen record snowfall this year, much of it making national and international news about two weeks ago. So I knew that when I headed north to the big city, I’d be seeing a lot of white stuff. What’s astonishing to me is the seemingly endless job snow removal employees of the Municipality of Anchorage have before them. Here’s a snapshot of my walk to the grocery store–a convenient 10 blocks away in this heart-of-downtown-neighborhood. Look closely and you’ll see a hint of sidewalk and a school crossing. Believe it or not, this is 12th Avenue–no small road–and we got a foot of snow the day I took this photo.
Just about every time I step out the door to run an errand–head to the post office, the copy store, or walk the dogs–I encounter a dump truck that’s hauling snow to any one of several area “snow lots” or “snow disposal” locations. That’s right. The snow is plowed, and once all the necessary places in the city are plowed, if there’s time before the next storm then the dump trucks start hauling. Just how much snow could there possibly be to haul? Over 70,000 dump truck loads have been hauled in Anchorage this snow season already, and winter’s only half over. If that’s hard to think of, imagine 80 inches of snow spread across 1300 miles of roadway. Then try to pick up all that snow and put it somewhere else–all within the city limits. I suppose either way you look at it snow removal on that scale seems damn near impossible.
And of course, the snow lots are land within the city that is leased using tax payer dollars. The land is there simply to hold snow. It’s not unlike a city dump, except the white stuff goes away (by mid-summer). But Anchorage’s snow lots are full and the city is already over-budget for plowing and hauling…The municipality website tells me if you took all the snow in Anchorage this season and piled it into a 5-acre lot, it would be 250 feet deep!
Meantime, I’m hunkered down here in the former home of former Senator Ted Stevens (yep, that’s right), chilling with a few sled dogs and my laptop and trying to take them out at night for a good run around Westchester Lagoon. I can’t complain, but I’m not the one driving a dump truck, either. Tonight, we had a full moon and almost clear skies…but I just checked the forecast and more snow is on its way.