0
2
{This somewhat follows from yesterday’s post…}
So sometimes the only thing left to do is get out there and live it up and throw it all into the air like you just don’t care. Longtime pals Jen and Chad own The Pizza Shop & Dry County Brewing Company in downtown Spruce Pine, NC. I had plans to go there as a customer this Thursday and upcoming Saturday night. But when I got wind they were down to staff members for two nights with major events planned, I gave Jen a call. After all, back in 2005, it was Jen who gave me my first go at being a barista when I worked for Penland School of Crafts Coffeehouse (which in turn led to arts writing, which in turn led to my own business). Jen’s response when I told her it was me on the other end of the line? A delightful, ear-piercing, ever-loving scream. Yes, she reasoned, they might could use my help.
And help I did…
Nothing like the long shifts of a being full time server or the long days of summer rush hours at the old Coffeehouse, but enough to say I helped a crew of really great people run things a little more smoothly and got to earn myself a dern good pizza and beer at the end of my shift (gluten free, ta boot!). The greatest gift of all? Being back in with the community, getting outside of my head, and worrying about things that could be immediately noticed and fixed (ex. dishes need to be cleared, cheese shakers need to be filled) rather than long-term big-life whathtehellamidoing kinda dilemmas. Besides, who wouldn’t want to work with this crew? 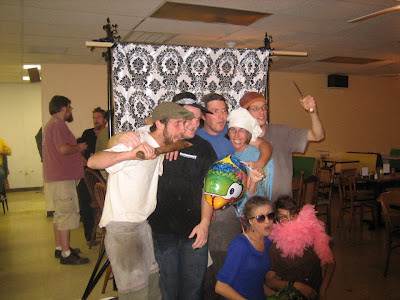 ***
This week I’ve quoted from Monthly Fiction, my email service that offers 1 short story for a buck a piece, delivered to your inbox once a month over the course of a year. 12 stories for 12 bucks in 12 months. It’s the simplest, most direct way that readers can support my creative writing life on the road and enjoy great fiction while they’re at it. If you’re so inclined, please consider subscribing and reading my fiction.

Today’s quote is from the short story “The Naming of Things”:
Jet was tired. Bull-screwed, hound dog tired, as the cab driver spun out, left him heaving against the entry sign to Appleglen Apartments. He curled a tight fist into the dappled apple image inked along the border of this month’s banner: Voted Laurendale’s #1 Apartments for Seniors. (Read the rest of this story…)