The Writing Studio: Some Days Are Slower Than Others

0
0
Of course the other part of restoration and remodeling is frequently feeling as though you’re moving at a snail’s pace. Today we wanted to buck up the rotten widowmaker trunk
and roll it in pieces down the mountain, but the pull-cord on Dad’s
chainsaw mysteriously wouldn’t budge. Instead, Dad jacked the Airstream Sovereign up and changed a flat tire. We also need it up in order to slide the galvanized sheet metal into place under the bathroom, but we couldn’t do any more work on hands and knees after changing the tire because Dad’s back is strained. Instead? We went to the gym for some gerbil-on-the-machine hazard-free exercise and felt better for it, too. 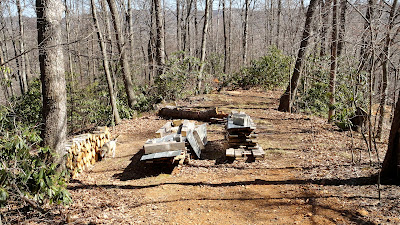 When we returned, the least enticing task we had to deal with was moving these two piles of milled lumber (shown above) from the land. This wouldn’t be so obnoxious if it weren’t for the fact that, for six years, these piles have been moved and moved and moved again to various spots on my parents’ 5 acres…and we just can’t seem to put them anywhere that doesn’t demand moving them yet again. It’s good wood–locally milled poplar and oak from the trees felled to build my parents’ home on this very ridge–and knowing Dad, he’ll use it some day without a doubt. In the meantime, where to put it?

About a year and a half ago, Dad decided to build a garden shed and was able to make it using almost all milled lumber from those piles of lumber. The catch? The garden shed was going to be built where the piles of lumber then sat. Surely, we thought at the time, moving what was left of the piles to this spot on the lower outcropping of land would be the ultimate solution. Surely, after half a dozen years and just as many movings, the wood could sit there, safely stored and stacked, until it was needed in the coming years.

Then we bought the Airstream. And the only logical place to put it, of course, was the lower outcropping of land–a spot so lovely with its 270-degree view of mountains that my folks almost considered making it the main house site back in 2005. They decided against it only because it was too narrow, a problem that isn’t really a problem if you’re talking about a trailer.

Tomorrow? Hopefully we’ll finish moving the stacks (which involves a truck, and a hill, and some ants, and some palettes) and get that sheet metal in place. With any luck, we could even start cutting insulation. Snail’s pace or not, it’ll get done eventually.

***
Today’s Monthly Fiction quote is from my short story “Kabul Stadium”:
We are twenty-two boys in a room, forty-four feet that can run, one gigantic breath being held. I study our teacher’s face but she seems lost, prayers spilling from her mouth like broken teeth. (Read the rest of this story…)