0
0
Sunday afternoon I took off for a week on Oak Island, the very southern tip of the North Carolina outer banks. Being someone else’s guest and also being relatively naive about fishing in general, I still had high hopes for catching enough fresh seafood to survive the apocalypse. Perhaps that was a bit lofty, considering I own neither a boat nor a rod, but so far this trip has been short on nothing–from generosity to learning–and I’ve put together a little video clip to share some of my favorite moments and sights courtesy my hosts, Alex and Captain D. Each trip out on the water has made me pine for Alaska–the views, the air, the bigger fish–but I will say that here the seas were calm, the temperature a perfect 73, and the daylight was long. I’m not in much of this video (because I was filming), but I did my share of slitting throats, baiting minnows, asking questions, and–yes–peeing over the side of the boat.

Day One we trolled in the Atlantic for a morning and had great success–8 bluefish and 3 Spanish mackerel. We also set crab traps with the unwanted fish guts and discovered 6 blue crabs and 1 stone crab about 12 hours later. Day Two we anchored at the mouth of the canal and caught a few fat drum fish in about 2 hours (meantime, a flounder teased Captain D’s line in slow torture), but each came an inch or two shy of regulation (they must be 18-27″ inches to keep). We did have success cast-netting for shrimp, though, with about 40 small shrimp for bait and a dozen large enough to eat…all caught within a matter of about 20 minutes. Not too bad for late October and just a stone’s throw from the house! Day Three we fished from the dock and “fed the crabs” all day–in other words, the crabs mutilated our live minnow bait and we caught not 3, not 2, not 1, but…zero fish.

We’ve got two full days of fishing left and with Captain D called back to “the real world,” we didn’t think we’d get out on the water again. But the neighbor called and we’re headed 9-10 miles out into the Atlantic on Friday to fish for king mackerel. I’m hoping the pendulum will swing back to the other side, but even if it doesn’t, it’s been a good run! 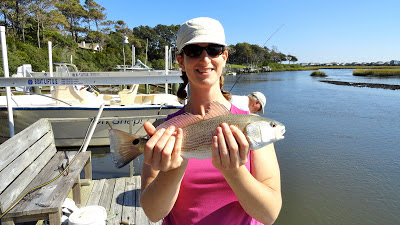