When I first moved to Western North Carolina 10 years ago, I came fresh off the trail. For ten months prior, I worked with a backcountry trail crew (shown at right) in the Adirondack Mountains and State Park–a 6 million acre park and preserve three times the size of Yellowstone. To this day, the Adirondacks are one of our nation’s better kept wilderness secrets. I made friends for life in that Park, and also gave a good measure of my own knee cartilage to the trails as we hiked with 20-pound rock bars, chainsaws, fuel, pickaxes, sledgehammers, rebar, and more (on top of our already loaded packs).

Needless to say, I felt excited about moving to the Black Mountains to teach. These weren’t the vast peaks of the West I had grown up with, but they were the highest peaks this side of the Mississippi (actually, this side of a high promontory in South Dakota, to be obsessive about it). But when I arrived, maps were few and far between. What I did find was usually dated, and I quickly learned that locals had different names for many destinations than the Forest Service did. It was not unusual for me to drive to a “trailhead” marked on the map, only to find nothing at all. Worse still, to be hiking along and realize the trees didn’t have trail blazes anymore, I was following an old logging road, and there was no one around to ask what would link back up with what and in how many miles.

I still backpacked a few times a year in WNC back then. But mostly, I planned trips elsewhere: Idaho’s Bitterroot Mountains, Wyoming’s Wind River Range, Utah’s Canyonlands, Oregon’s Wallowa Mountains, and many-a-fine excursion to Alaska as well. Around 2009 I left to expand my career and pursue writing fellowships, all the while keeping WNC as a home away from home and visiting a few times a year. Fast forward to 2012 and my return this fall to the Black Mountains came laced with the best surprise a hiker could ask for: the North Carolina High Peaks Association.

I noticed the change first in March, when I went on a short solo backpack trip starting at Colbert’s Creek Trailhead and concluding in my own backyard near Shuford Creek. (See the video here.) The Woody Ridge Trail, long despised by locals and tourists alike, is the steepest marked ascent of the Black Mountains. I planned my trip so I would come down Woody Ridge (sorry, knees) on the last day, when my pack was at its lightest. Thinking I’d surely have to bushwhack through dense rhodis to find the main trail, I wanted to be as light as possible. To my surprise, the trail was not only marked clearly, but it was also beautifully maintained.

If you’re wondering when this tale gets to the headline–Booty in the Black Mountains–here it comes: 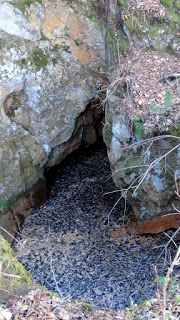 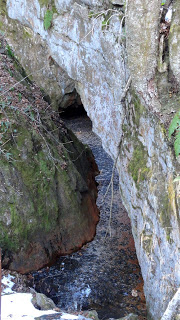 Last weekend, I went on my first hike with the North Carolina High Peaks Association. Ranging in age from thirty to almost seventy, the group met on the town square at 8:30am and didn’t waste a moment. A little before 9am the Yancey transit van (paid for by the trail association) dropped us at the bottom of Bowlens Creek Trailhead where Water Shed road intersects with Bowlens Creek Road off of 197. The group’s leader, founder, and president Jake Blood pointed out many wonders along the way: the watershed, damn, and water supply lines that feed the town of Burnsville; old “cuts” into the land where mica deposits sat so shallow in the soil that digging a full mine wasn’t necessary;  a bowl to the west (near the backside of Celo Knob) that used to be the Native Americans’ mica mine; a trace trail leading to Ray Mines; an old heli-pad landing; and perhaps most exciting of all–the old William Shanty Mine. 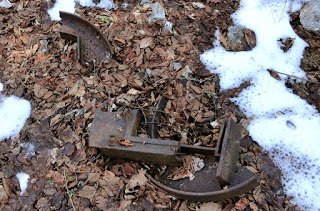 Here, evidence of old mining equipment dappled the forest floor. Rusted machinery, piles of unwanted rocks and gems, and a deep cut into the rock hinted at a once fully-operating and successful mica mine. Large chunks of mica were as easy to spot as a downed leaf, and many chunks were mixed with small, reddish gemstones.
Down below, black water with a thin layer of ice waited to swallow anyone foolish enough to step too close to the edge. 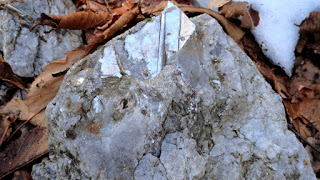 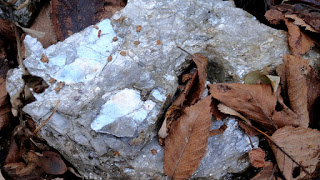 Booty in the Black Mountains? Indeed, but I’m not talking about the riches once unearthed from this spot. I’m talking about the currency of history, the cash of stories, the delightfully rattling coins of the imagination.

We concluded our hike with a little bushwhack further up the mountain toward Jump Off, which is north of Celo Knob. On our way back, we traced an old logging road back to our initial detour from the trail, then headed west down the mountain and back out by Bowlens Creek. It wasn’t too terribly long–about 7 miles–and although I got to explore new areas on the west slope of the Blacks, what mattered more was that the mountains came alive to me again. Where there’s a story, there’s possibility. And where there’s possibility, you can bet I’ll be going back again and again.

During these years of The Great Recession, where we can’t pick up the paper or tune into the news without being reminded of how much has gone down the tubes, let’s remember that being a taxpaying citizen in this country also means becoming part owner and enjoyer of some of the wildest places on earth–our National Forests and National Parks (not to mention all the state and city parks). That means you and I and our neighbors all share more then 274 million acres of land. If that doesn’t make your life feel rich with possibility, recession or otherwise, then I don’t know what will.