Broadsides from Flashes of War

0
3
Not too many months ago, I had a 10-week residency at Prairie Center of the Arts in Peoria, IL. While there, we had an open studio night and Robert Rowe, a professor at nearby Bradley University attended. He enjoyed my work and asked me later that evening if I could send him some of my war flash fictions for consideration as broadsides published by his side project, Gold Quoin Press. I agreed, and felt flattered, but wasn’t certain anything would come to fruition.

Robert was more than true to his word, however, and over the next few months we agreed on a contract and discussed design ideas for 2 of my war flashes, “With the Burqa” and “While the Rest of America’s at the Mall” (use the link to see a video recording of this 1-page story.) Incidentally, these two stories are now the opening of my forthcoming collection, Flashes of War. Working in collaboration with his students at Bradley University, these two broadsides were created and I am honored to debut them for today’s blog post. Each broadside is hand-printed and hand-designed out of an edition of 60. In exchange for my work, Gold Quoin Press has given me half of the broadsides to sell. 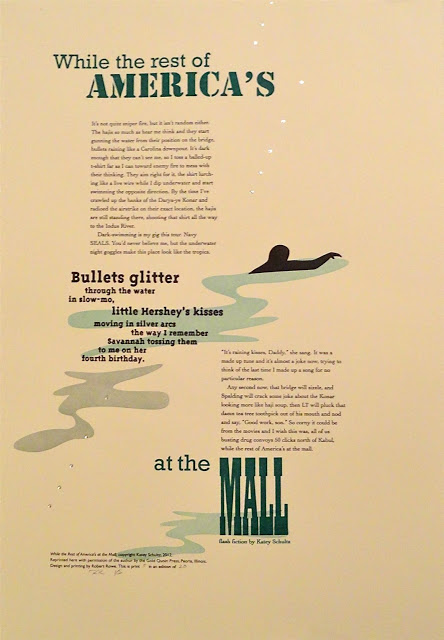 “While the Rest of America’s at the Mall” is actually on white paper and “With the Burqa” is on beige paper with a slight tint of pale yellow. Each broadside is about 13″x19″ and comes in an archival quality clear sleeve. I will sell them at my readings in person. 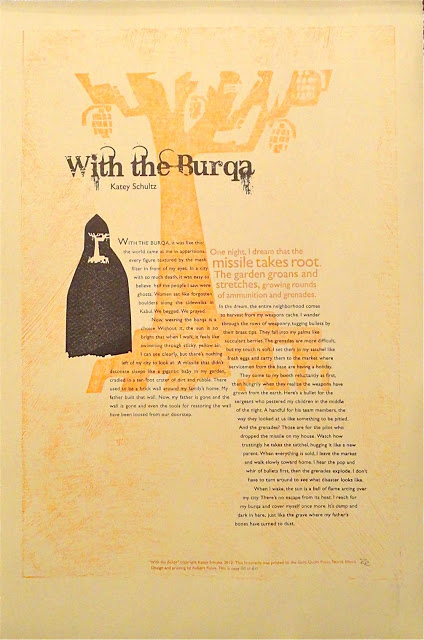 I’m not sure my unprofessional photos of this amazing artwork does them justice, but I hope readers can at least get a sense for Robert’s vision, design talent, and dedication. This is someone who met me, saw my work, and immediately understood the heart of it. Then, he put his talents to work in creating something more beautiful than I ever could. For instance, in “Withe the Burqa,” the narrator dreams that her garden starts growing ammunition. If you look at the tree in the broadside pictured avobe, you can see that the space between the branches form weapons, that the fruit it bears look like grenades, etc. Up close, in your hands, and in person, these broadsides really complete the picture for me. I hope you feel inspired to enjoy them, too!
Showing 3 comments