Josh Ritter at The Orange Peel 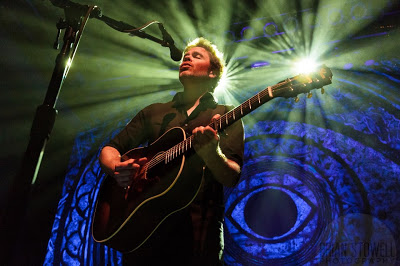 I drove across the country with his music, pure poetic lyrics ringing through my Volvo speakers all the way from Imnaha Canyon, up and over the Continental Divide, onward toward the lowlands of Lake Country in northern Michigan, and eventually homeward bound into the heart of Appalachia.

I borrowed his wisdom for mixed CD’s made for three, good men over the course of two, hard years: the one in the Wallowas, another in Alaska, and another still who lived “way back in the cut” of these mountain hollers. For the first, I thought a song might bring him back to me. For the second, I thought a song might make him hold on. And for the third, the song worked–the man waited and waited for me, though our final note was not as harmonious as the song itself.

I even covered a few of his songs when I felt brave at an open-mic night for a celebration in Celo, an impromptu backyard campfire in Milwaukee, and hidden away in a lake cabin in the middle of a 6-million acre park in the Adirondack Mountains of New York.

But mostly, the music of Josh Ritter is something I sought solace in privately over the past 11 years. Lyrically, he is the finest contemporary, American folk rock writer since Bob Dylan and Dave Carter. Musically, he has explored everything from Travis-style fingerpicking to punctuated, syllabic, downstrokes on an electric guitar. Vocally, he’s sung in barely a whisper and shouted his despair. He’s gone solo and backup band, free (I was there, Music Millennium on NW 23rd, before it closed down, you remember the time) and high priced, tattered t-shirts and pressed collars. He’s even crossed into fiction, publishing his first novel, Bright’s Passage, through The Dial Press.

Tonight, I get the best of the best. I get to see one of my favorite musicians live, and I get to do it all by myself. Of course, there will be another 1000 people standing in front of the stage at The Orange Peel, and this being a sparsely populated area I’m likely to stumble into someone I know…but as soon as those lights drop, as soon as that first string is plucked, as soon as that voice comes at me live for the fourth (fifth?) time in seven years, I will have arrived at exactly the moment I’ve been anticipating:

A concert. Alone. The anonymity of darkness. The hush of bodies and the hopeful heartbreak of faces, only faces, upturned to the stage light like so many babies looking out of their cribs. Sound melodramatic? Perhaps, but consider this: we’re all reaching for the same thing and very few of us have the same way of getting there. When we find someone who speaks in that direction–through literature, through painting, through music, you name it–we’re back to our most innocent selves again, angling toward the light.

Note: I’ve decided to bring a copy of my book, Flashes of War, signed to him in appreciation of a few songs in particular. I don’t want to be perceived as a groupie, but I sincerely hope I can get someone to deliver the book backstage before the show. Like myself, Josh Ritter writes about war, repeats thematic imagery, understands image-as-metaphor through verbs (even if he doesn’t know it), and pushes for something deeper through narrative devices. I’d like to talk shop about these things, and in a small way I hope that sharing the book might open a door.