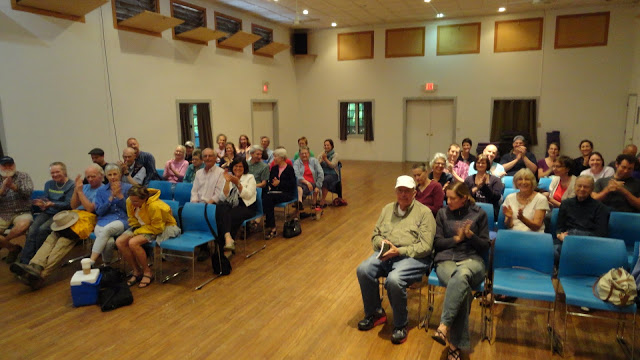 It’s dawning on me how difficult this is going to be. With two hometown readings complete and one to go, I’d be lying if I didn’t tell you that I fear “it’s all downhill from here.” I know I am a public optimist. I know I’m running a business here. But I also make a point to share, within professional reason, the highs and lows of the writing life with my readership. The highs of last week are obvious–a standing ovation at Malaprop’s, a few more good reviews, and a crowd of 45 yesterday at Penland School.

The low hasn’t happened yet, but in my mind it’s playing over and over. Here’s what I dwell on: I’m told that I will be reading to audiences of 2 to 5 people. If I’m lucky, maybe 10. Apparently no matter who you are or “how good,” this happens to many writers and public readings during summertime are an especially hard sell in northern states (where I’m headed). I’m also told that an author can expect to sell a book to 10-20% of its audience of strangers. So these hometown readings–where I’m selling to 50% of the crowd are unique. If you put these two facts together, in the coming months I could be facing hours-long drives with 4 people in an audience and 2 book sales. Two book sales through a bookstore equals $2 profit for me. (Through my website, it would be $14 profit, but the trade off would be that the tally doesn’t go toward NY Times lists and the purchase doesn’t create demand through a public venue.) So here’s where the other part I’ve been told about comes in: I will not make any money selling books.

But let’s go back to that public optimism thing, because
that’s what I’m going to have to hold on to. At this point there are about a dozen friends who have either purchased two copies of the book (1 for themselves and 1 for a librarian or book club leader or veteran), who have reviewed it on Amazon or Goodreads, who have ordered it through me and through a bookstore, or who have shared their enjoyment of it on Facebook. These friends are going above and beyond and it’s making a difference. Every time someone posts an honest, word-of-mouth rec of my book to their Facebook friends, I see a comment thread that includes at least one person who says something to the effect of, “Thanks for the idea, I just bought the book.” This is what it’s all about, folks. And this is what I’ve got to keep fresh in my head.

I’ve cast aside reason before: when I got in my car for a three-year journey; when I borrowed $55,000 for my MFA; when I skydived junior year of college; when I backpacked solo for a week at the age of 17; when I decided to write about war even though I’d never seen one…and most recently…when I hired a publicist and a book tour manager on my own dime ($7K, or roughly 35% of my annual income) and promised myself and the publisher that I’d do everything within my power to sell 5,000 books over the next 3 years.

5,000 books, friends. My publicist and my publisher both raised their eyebrows at that. Not because they’d object to it, not at all. But because it’s ambitious, I suppose, and perhaps also somewhat deluded. But I heard a talk a long time ago about how 5,000 is the baseline to make your mark and I’m aiming for it. As with chapbooks in poetry, where 500 copies sold is sufficient, for an independent university press that does no PR, 5,000 is going to be the buzz number. And as someone who wants to ultimately teach in low-res MFA programs, having 1 book is only half the hurdle. The other half is making sure that dang book reviews well and sells.

I’ve always been a little ahead of myself. I send out work too early, before it’s ready. I can see the finish line months, sometimes years in advance, and I grow impatient. I might have the right finish for me in mind, but I’m not always going to get there the way I think I will. This is a flaw that has probably helped me get this far, but it’s also made some moments of my life excruciating. I wish I could time travel to three years from now, or to my first (fingers crossed) big advance on a novel from a publishing house in New York. What would that writer say to me, this writer, today? Would that writer say, “You couldn’t have gotten this book advance [or low-res teaching job] if you hadn’t pushed so damn hard with Flashes of War. Good job. All your work paid off.” Or would that writer say, “If only you’d been able to relax and enjoy your first book tour more, you would have seen that you were headed here–to this book advance [or low-res teaching job]–all along, no matter what. Try not to worry as much this time around.”

But I know two things for sure: One, there is no justice in writing or in the publishing industry. The person who tries hardest does not always win. The person who sacrifices more does not necessarily gain it back, or gain more, in the end. And two, I know for certain that I’m never going to give up. Even if NYC burns down and all the publishing houses I ever dreamed of burn with it, I won’t stop. Somewhere out there the possibility exists that I can continue to make my living as a writer and advance my career from year-to-year. It’s just that right now, I can’t see how it’s going to manifest.

What I can see, however, are the shining faces from my reading at Penland School of Crafts, featured at the top of this post. And I can see the woman, Carol–was it?–who bought my book, introduced herself, and said, “I’ve always admired what you do. I think what you do is incredible.” I didn’t know who she was, and if I could have stayed forever in that moment, I would have (Ok, actually, that’d get kinda weird but you know what I mean). Thank you, dear friends, for being there (and here, reading my blog). I’ll carry your smiles with me across the miles.