0
0
There’s no mistaking it–that evergreen cool feel of Pacific Northwest air across my skin. This air will always represent the truest feeling of home for me. While I’ve called Appalachia “home” more recently, it’s with a forward-thinking tone, as in: This is where I’m making my home. But Portland is my tried-and-true home place… 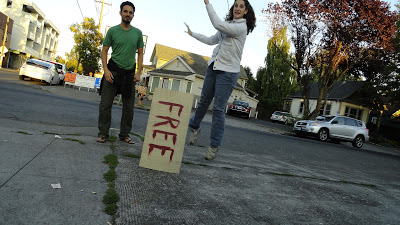 The city I learned to drive in. The city I loved and lost in. The city I snuck into and out of. The city I waited in concert ticket lines for–Pearl Jam, Red Hot Chili Peppers, Everclear, Foo Fighters, Tom Petty, Bush and girls singing everything zen on the Trimet 41 until ticket stubs wallpapered my bedroom like a badge of cool. City of coffee, of rain clouds, of Marlboro Lights. City of Happy Brown Bag and grunge rock. Of late nights at Powell’s, of food trucks and hairy vegans. Of coffee snobs and decadent doughnuts, of piercings like so many stars in the sky.

The city of soccer fields and cleats clicking down paved park pathways. Of undefeated Fillies seasons and real, red, team jerseys. The way the mud caked our shin guards, flaking off in dry sheets days later. How girls came together for the Let’s go Fillies! no matter who had the curls or who had the boys or even who was in a B cup with underwire. Later, the city for ruggers–Mom and Dad hosting the college team as we tore up fields and tendons, canvas jerseys and hard-toed boots.

The city of prank calls and slam letters, of S’s Jeep Cherokee flipping over on Hillsdale Highway and that same month, Cindy slamming her brakes as we rammed into another Jeep–not S’s–and I’m fine, everyone is fine. The city of Cindy, for that matter, who could have any boy she wanted but why that one, the same one, and how she shared with me all their secrets while I smiled my lying smile and the city, inside of me then, raining its silent rain across my cheeks. For years then: the city of everyone kissing and kissing, while I waited. Wondered. Gave up and moved on.

Gateway city to snowboarding and 40-ounce bottles of Old English 800. City of skipping classes, of still getting straight A’s, of bullshit multiple-choice tests and self-righteous senioritis. And I’m sorry, city, that we squatted on your soccer fields and peed drunk on the centerline in the middle of the night, that we ran your red lights on the east side because no one cared, that we heckled the Vietnamese man into selling Bartles & James again and again. That we chugged it while pretending to be black gangsta rappers.

And still, the city held us through those awkward years, like gathered clouds threatening to storm. It lit up and burned one down, it demanded gay rights and rights to die. The city. Our city. Where we’d meet on the corner and say “Fuck the [Star]Buck,” turning on our heels to walk the block to Coffee People. And then all of the sudden, that place on the Morrison Bridge where A’s mother jumped off…

What do you mean she–

The place in A’s front yard, then, where I stood and realized he’d moved: brother, bed, bookshelves, and that old beater their mom left them. That old beater. Our city.

She’s still here, her patchy sunlight pushing through clouds and deep green canopies, to bring my nostalgia into focus. It’s always so much clearer looking back. Everything lost, then found again. Everything so true, it doesn’t even need to be said.