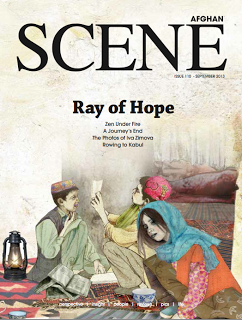 The September issue of Afghan Scene Magazine has reprinted an essay that I wrote for Necessary Fiction, based on the Epilogue in Flashes of War. Afghan Scene Magazine is the only English language magazine in Afghanistan and has over 8,000 subscribers. In addition to being published in full-color print, they offer much of their content online and in PDF (click here for the full PDF of the magazine and view my “Research Notes” essay on page 10). I found it fascinating to read the advertisements and commentaries by Afghan authors and see the different ways in which the magazine presents Afghan culture.

Dealing with the editors for rights of this reprint was a little bit tricky–and I share this not by way of criticism, but insight. Email communication was spotty and, at times, I wondered if I’d sent my writing into a black hole. But I really wanted this to work…and felt honored by the request for a reprint in such a prestigious publication. When I tried reaching out for confirmation, I received a sincere apology: “Sorry for not getting back to you sooner. My girlfriend has been
released, but she was kidnapped in Afghanistan and I’ve been dealing
with that.”

Talk about a humbling response that puts things in perspective. How can one be impatient in the face of that? It was an eye-opening email to receive and for that reason, I wanted to share my experience. I am grateful to the magazine for the reprint. It puts my writing in front of people who might otherwise never even encounter it.

Next month, Afghan Scene Magazine will reprint 4 stories from Flashes of War: “While the Rest of America’s at the Mall,” “With the Burqa,” “The Ghost of Sanchez,” and “Into Pure Bronze.” The second story is written from the perspective of an Afghan woman who dreams of growing weapons in her own garden, which she will later use to kill American soldiers. It’s intense to think about what it means for me, as an American author, to have a story with that content reprinted in a country where our soldiers (carry them safely home) are still on the ground. But those of you who know the work, know that it is also much more about providing a window into the character’s deepest fears, powers, and confusion than it is about suggesting actual violence. In concert with the other stories being reprinted, I think Flashes of War will be well-represented.

If you use social media, please consider sharing this link or any direct links to the magazine on Facebook and Twitter. Not very many folks in the United States know about Afghan Scene Magazine, a publication which I believe could help Americans start to bridge a bit of the culture gap between ourselves and a country we’ve been fighting for over a decade.