Ernest Hemingway: An Interview in The Paris Review, circa 1958

3
4
I don’t know very many writers who can go over to their parents’ house and say, “Hey Dad, you know that one famous interview Hemingway gave in The Paris Review? I’ve never read it but people often talk about it. Do you have it?”

Of course Dad has it.

He has all the books that matter–and the most important editions are wrapped in plastic, stored on one of two special shelves, categorized separate from the fiction and poetry in the living room (which are organized roughly alphabetically, with notable exceptions such as Wendell Berry and Jim Harrison whose books–no matter the genre–all belong next to each other on the same shelf, crammed close like siblings aligned for a family photograph).

Never mind that the interview I was looking for was published in 1958, when Dad was…um…a third grader. Never mind that I grew up surrounded by his collections and still don’t understand how freaking awesome its contents are. Within about 40 seconds, Dad has found the desired copy of The Paris Review and handed it over, like no big deal. (I won’t tell you the price he paid in 1996 when he finally found the coveted back issue and added it to his collection; suffice it to say that in 1958 it sold for $1 or 250 francs.) 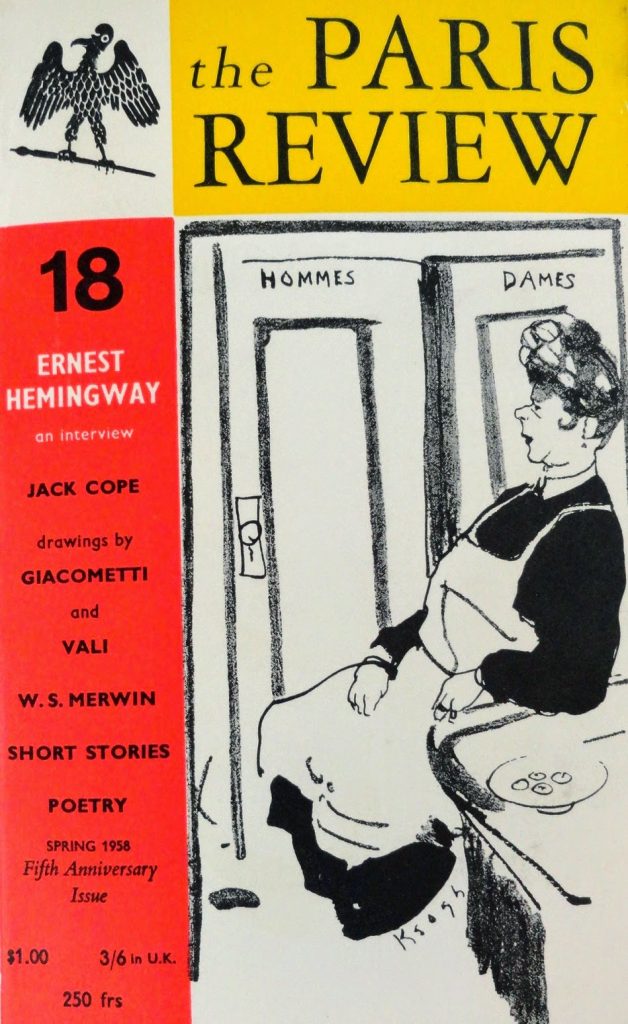 Here are some choice excerpts:

Interviewer: Is emotional stability necessary to write well? You told me once that you could only write well when you were in love. Could you expound on that a bit more?

HEMINGWAY: What a question. But full marks for trying. You can write any time people will leave you alone and not interrupt you. Or rather you can if you will be ruthless enough about it. But the best writing is certainly when you are in love. If it is all the same to you I would rather not expound on that.

Interviewer: How about financial security? Can that be a detriment to good writing?

HEMINGWAY: If it came early and you loved life as much as you loved your work it would take much character to resist the temptations. Once writing has become your major vice and greatest pleasure only death can stop it. Financial security then is a great help as it keeps you from worrying. Worry destroys the ability to write. Ill health is bad in the ratio that it produces worry which attacks your subconscious and destroys your reserves.

Interviewer: What would you consider the best intellectual training for the would-be writer?

HEMINGWAY: Let’s say that he should go out and hang himself because he finds that writing well is impossibly difficult. Then he should be cut down without mercy and forced by his own self to write as well as he can for the rest of his life. At least he will have the story of the hanging to commence with.

Interviewer: You seem to have avoided the company of writers in late years. Why?

HEMINGWAY: That is more complicated. The further you go in writing the more alone you are. Most of your best and oldest friends die. Others move away. You do not see them except rarely, but you write and have much the same contact with them as though you were together at the cafe in the old days. You exchange comic, sometimes cheerfully obscene and irresponsible letters, and it is almost as good as talking. But you are more alone because that is how you must work and the time to work is shorter all the time and if you waste it you feel you have committed a sin for which there is no forgiveness.

Interviewer: So when you’re not writing, you remain constantly the observer, looking for something which can be of use.

HEMINGWAY: Surely. If a writer stops observing he is finished. But he does not have to observe consciously nor think how it will be useful. Perhaps that would be true at the beginning. But later everything he sees goes into the great reserve of things he knows or has seen. If it is any use to know it, I always try to write on the principle of the iceberg. There is seven-eighths of it underwater for every part that shows. Anything you know you can eliminated and it only strengthens your iceberg. It is the part that doesn’t show. If a writer omits something because he does not know it then there is a hole in the story….

Anyway, to skip how [The Old Man and the Sea] is done, I had unbelievable luck this time and could convey the experience completely and have it be one that no one had ever conveyed. The luck was that I had a good man and a good boy and lately writers have forgotten there still are such things. Then the ocean is worth writing about just as man is. So I was lucky there. I’ve seen the marlin mate and know about that. So I leave that out. I’ve seen a school (or pod) of more than fifty sperm whales in that same stretch of water and once harpooned one nearly sixty feet in length and lost him. So I left that out. All the stories I know from the fishing village I leave out. But the knowledge is what makes the underwater part of the iceberg.

Interviewer: Finally, a fundamental question: namely, as a creative writer what do you think is the function of your art? Why a representation of fact, rather than fact itself?

HEMINGWAY: Why be puzzled by that? From things that have happened and from things as they exist and from all things that you know and all those that you cannot know, you make something through your invention that is not a representation but a whole new thing truer than anything true and alive, and you make it alive, and if you make it well enough, you give it immortality. That is why you write and for no other reason that you know of. But what bout all the reasons that no one knows?