0
0
It’s hard to believe that, 10 years ago, The Writing Life Blog began. I wasn’t yet a writer. I was a 26-year-old coffee-loving, mountain-loving, Oregonian living in rural Appalachia who had worked herself so hard as a middle school teacher, she’d worked herself sick. I mean that quite literally. I loved teaching teens–and the school I worked for even paid for my Montessori Certification. It was an incredible community to be a part of. But three years and $4,000 worth of medical testing (the school paid for that, too, thankfully) later, the verdict was in: you’re stressed.
That was putting it mildly. I’ll spare readers the physiological details of what that level of stress looks and feels like on the body. Suffice it to say that, at a relatively young age, I crossed a bridge. There would be no going back to teaching full time. Ever. Again. I swore to it and I meant every syllable. I had no regret about “losing” this career. No guilt. I knew with every cell in my body that I could never, ever work in an environment again where there was always more to be done. Teens and boarding schools in particular are a tough setup for that, and the combination proved more than my younger self could handle. I also learned that I needed to get a grip on my own limits. What would “balance” look like? Time to try and find out.
I told the school I wasn’t coming back at the end of that academic year. I moved across the river into an off the grid cabin and bartered for my rent. I put in a kitchen sink and water line. I peed into a bucket on the porch. I pooped and showered at the neighbor’s house. For rent, my barter was raking, splitting and hauling wood, housesitting, weeding, and various other tasks on the 5 acres owned by the owners of the off the grid cabin. I lived right up against the Black Mountains, the highest range in the east. I decided I’d spend some time writing to prepare a portfolio of my best nonfiction and apply to graduate school. I had free rent and my parents had recently moved from Oregon to North Carolina, so I didn’t feel like moving. I loved the South Toe Valley. I opted for low-res MFA programs only, and researched them online with dial-up Internet access, there in the middle of the woods, in a tiny little cabin.
I had enough saved to get by for a while, but I did need work. I did the only thing a Portlander looking for work ever does: I applied for work as a barista. Thing was, at the time, there were only 2 coffee shops in all of Mitchell and Yancey Counties. One was in downtown Spruce Pine and used only “to go” styrofoam and didn’t wash the wand between foaming cow’s milk and soy milk. The Oregonian in me couldn’t get near that place, and still won’t. The other was at a place called Penland School of Crafts. They had an opening for two shifts a week, 9-11pm at night. It was 30 minutes away. I lost most of my wages in gas but I didn’t care. It was work, it was community, and it was free coffee.
Fast forward three years and I’d earned my MFA from Pacific University, worked up to Assistant Manager at the Coffeehouse (25 hours a week, plus 10 meals per week, plus health insurance, plus paid winter lay-off). Things were looking good.
Winter of 2009, my graduate loans kicked in, the Great Recession roared, and I was laid off. After a mild freak out, I hit the road. For three years. There were too many people like me out there in the world–recently graduated MFAer, qualified to teach, glowing references, the whole bit. I had to do something to make myself different. I had to do something that would end with a book, a fellowship, or some sort of self-employment that enabled me to live simply and write forever and ever. My dream was that simple. It still is.
Don’t get me wrong–I had many doubts. There were a lot of tears on the road. I threw fits. I was not always graceful. I asked for too much. I had bad timing. But I also smiled widely. Helped others. Volunteered. Had great timing. Made friends. Taught children. And wrote something about a very tender subject in the American psyche. Other people liked it enough to publish it. That, plus the memories, made it all worthwhile.
I guess I’m saying all of this, because in retrospect, I had no idea what I was doing on dial-up Internet access in the backroom of the Penland Coffeehouse that first night after my first shift in my “new job.” There were these things called blogs, and in 2005 they sounded nifty and new. I thought I’d start one. The manager had me come in early that day to work with her and train, before the evening shift. I decided to write about it. Here’s a screenshot of that first post, in full, way back when LiveJournal was all the rage: 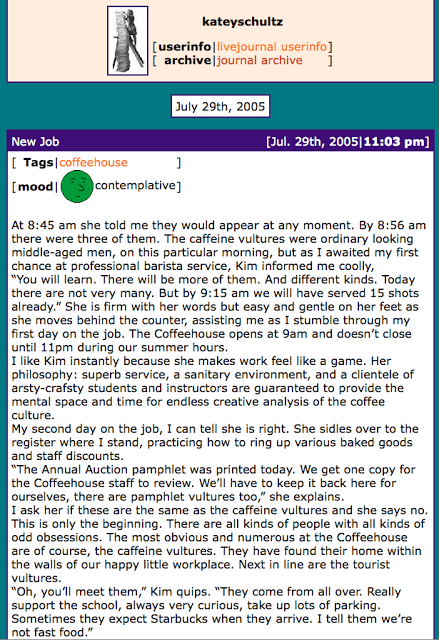 That’s it. A scene. It marks a beginning, though, a leap of faith. Now, The Writing Life attracts almost 10,000 monthly viewers. I feel connected, in ways both big and small. This connection, however anonymous, has provided a space and invitation for 1,953 blog entries over 10 years. While I prefer to use this space to celebrate new ideas, raise questions, or capture a moment, today I want to use it to say THANK YOU for reading. Without you, without this, thousands of words would never have been written, and surely as many road miles would never have felt possible. Last but not least, I never would have found my way home.