0
0
Friends following The Writing Life on Facebook will know that I spent last week in Gatlinburg, TN as the first Writer-in-Residence in the 100+ year history of Arrowmont School of Arts & Crafts. This opportunity came about as a result of years of conversations between administration leadership and board members, as well as more recent informal conversations between myself and Program Director Nick DeFord (who is also an artist).

In short, the school had reached a point where it was ready to discuss dates and numbers, getting real with this very knew and unknown programming element incorporating writers. Arrowmont is and has been a place where people go to have conversations. Yes, they go to make art, to learn, to connect, and to be challenged. But they also go for connection through that age-old medium of language. Writers, it seemed, ought to be a natural part of that selling point.

For my part, I had nearly given up on the idea of finding a place that provided an equal home for literary fiction and arts writing. Indeed, those two parts of my writing life have been kept so separate, most readers of this blog aren’t even aware that I’ve written over 70 essays featuring contemporary American craft artists and their creative processes. It’s a “side job” as a freelancer for various publications, but it’s also a deeply gratifying fascination I’ve maintained ever since I enrolled in my first aesthetics course as a Philosophy major in undergrad. I love thinking critically, deeply, and precisely about the parallels between an artist’s conceptual and technical processes and the final form and function of any given piece of finished artwork. Sound heady? Maybe so. But it’s become my job to avoid headiness, and in that regard, to also avoid “art speak” (saying nothing while attempting to sound like you’re saying everything). As often as possible, my art essays are written in 1st person and include dialogue, scene, descriptive detail, and of course–information about the work itself.

But let’s get back to that buzz word in my opening sentence: Gatlinburg. That’s right, folks, the “Vegas of the South.” If you’re into the arts, chances are pretty good you’re not into Vegas. Or at least, when you think of “making art,” the last place you want to go is Vegas. So, too, here in the South. If you’re into “making art,” you think in terms of peace, quiet, Appalachian history, tradition, solitude, or a carefully selected and intentionally secluded community. You don’t think of arcades, BOGO Big Gulps, casinos, and neon lights bursting over the Smoky Mountains.

Yet despite the fact that this school is located just a few dozen meters off the Parkway drag of Gatlinburg, it is a world unto itself. Trust me. I’m a picky writer who is obsessive about sights and sounds, grumpy about interruption, and obsessively attuned to the natural world. I live in a quiet, private, beautiful place. Why would I leave all that just to be near “the strip”? Because Arrowmont is a place where the conversation starts. Who knows what talking to the painter, whose work has been “translated” into tapestries woven in Mexico might lead to the next time I sit down at the desk? Who knows what material my enter a ceramicists mind after we shared lunch, talking about the meditative parallels between the spinning potter’s wheel and the click of buttons across a keyboard?

I wrote several thousand words a day while at Arrowmont, and that was just putting in half-days at the desk (I spend afternoons wandering the studios or meeting one-on-one with artists). Even walking outside, along the sloping lawns or curved gravel pathways, the sights and sounds of the very nearby strip were nearly invisible and inaudible. What did I hear instead? Cicadas. Laughter. An impromptu picnic. A pot of dye hissing on the burner outside the Textiles studio. What did I smell? Smoke from the wood-fired Anagama kiln. Cedar shavings from the wood-turning class. A pleasant must from wool being woven into tapestries. Freshly baked muffins. Coffee, coffee, and thankyouverymuch more coffee. What did I see, taste, touch? I could go on for pages… 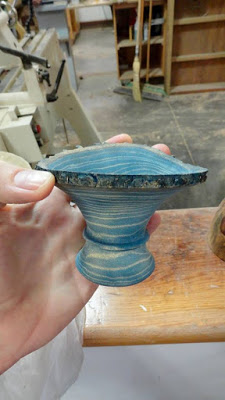 In five short days, I came away with a very clear feeling that writers are needed on craft campuses. Not only because many writers can more readily “put words to” other artists mediums than those artists themselves. (Ask a glassblower to write an artist statement, and he might simply turn up his iPod and pretend you’re not even there–for many artists, the written word is simply not fun.) But because the conversation works both ways. I certainly couldn’t write my novel in blown glass, but I might feel the wall of heat walking into the hot shop and incorporate details from that sensory experience into the scene I’m writing in my novel right now, which takes place in a desert. Art inspires life inspires art, just as the wood-turned bowl shown in this photograph inspired a textiles artist to make a unique dye that highlighted the grain, which in turn inspired me to take a photo and share it, which then lead to an interesting conversation on Facebook in which a fellow writer told me about a childhood memory she had of her father’s wood shop. Will that memory turn into an essay? Quite possibly.

But more than anything, what this week instilled in me is that there’s genuine joy in connecting with other artists. No matter what your medium or what you’re making–or even if what you make falls apart in the end, gets deleted, or breaks during firing–it’s beneficial to put ourselves in situations where conversations can happen. Across mediums, across cultures, across campus. Arrowmont made that possible, and by including me as Writer-in-Residence, it was also financially and professionally viable. I learned, I helped, I wrote, I worked. And I certainly hope to go back.