0
0
Two weeks ago, I blogged about my crisis of faith with the novel. That post also included a plan to handwrite a compressed version of notes on author Lisa Cron’s Wired for Story and then, according to this guide, get down to the very hard business of interrogating every move I’ve made in the novel. Gag me, right? I mean, this is the part where I sit in my chair and SQUIRM because I hate being cornered. I want to write. I want to imagine. I want to put tidy little bows on tidy little scenes and pat myself on the back every once in a while for a damn good metaphor and a knock-out image. I do not want to put my own work in the witness stand and record its deposition.

But, since when has writing a novel ever had anything to do with my own agenda? Um…never.

So, slow and steady, I’ve been plugging along. First and foremost, I discovered that it’s not enough to devote a few hours in the morning to this work. While that approach suits novel writing (that is, the actual writing part) quite well, when the novel is on the witness stand, it’s rather rude to leave it sitting there all afternoon while you tend to other things. Nope. Not gonna work. This requires deep focus. This requires all day. I adjusted my schedule, doing all my critiques for private students over the course of several days, buying myself 3 days to work on the novel (and tend to basic emails at least once a day, plus 2 hours of training).

Here’s what a typical entry in my handwritten ledger might look like, as I’m walking myself through Cron’s checklists and some of my own, modified questions:

Is something at stake on the first page, that the reader can see? Yes. Nathan has to live in order to lead his platoon and keep everyone else live. But he’s tired, he knows he has blind spots, he’s uncertain about home, and Rachmann is a burr in his side due to a past humiliation and failure.

Is there a sense in the first few pages that all is not as it seems? Yes, there are questions about Shanaz (and why she does what she does) as well as why the Taliban were using American currency in public. There is also a question about the shell casings that Ghazel shows to Aaseya.

Do the protagonist’s issue, theme, and plot work together to answer the story question? The issue for Nathan is that he believes he has to do everything right in order to meet his external goals of keeping every soldier on his watch alive, as well as raising another child when he gets home. But according to the theme, right and wrong are subjective and messing up is part of life. This tension leads us to a plot constructed of events where the theme is overlaid against Nathan’s efforts, exacerbating the impossibility of his external goals by thwarting his internal goal (to be seen as capable and valuable). Eventually, when a soldier is killed, Nathan’s internal and external goals appear to be failures and Nathan feels like he can go no further. The story question is answered: No, Nathan will not succeed in his attempt to keep every man alive. But when Nathan goes home and realizes his goals were impossible (???), the other story question will, in fact be answered: Yes, he can have another chance at fatherhood.

What is the theme? What is the point? The theme (for Aaseya’s narrative) is that you can’t control your circumstances or how other people see you, but you can control how you decide to see yourself. The theme suggests that even though circumstances are out of our control, we can still find a measure of independence if we are willing to adjust and reframe our worldview and behaviors. The point is that powerlessness does not have to be fueled internally; you can make your own life even in the face of oppression.

Is anyone else’s head spinning? Don’t get me wrong. Working on this kind of interrogation requires taking breaks. Yes, I’m deeply focused. Yes, I’ve got all day. But no, I do not know the answer to every question immediately. I have to reread chapters (which involves making some line-level changes as I encounter issues). I have to think about what I’ve written versus what I think I’ve shown. I have to think about the hard answer, the deeper answer, the answer that comes not as a first or second thought, but as a whole body insight. Then, I have to humble accept where I find holes, flag them for further revision, write on my handy yellow “What If? cards (for new ideas), and muster the strength to keep going anyway. 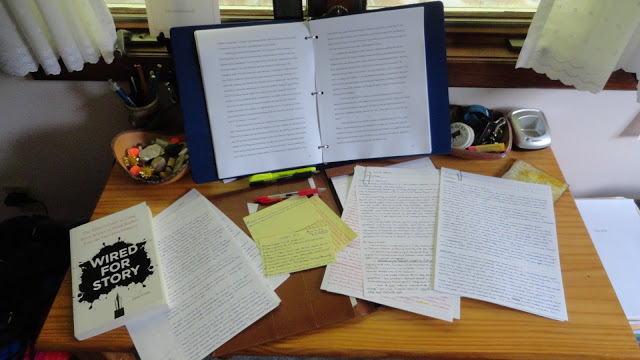