Revising the Novel: “Self-Flagellation of the Final Lap”

0
0
My novelist friend from across the river has been away much of the summer. I was supposed to hand my novel over to her on July 10, but then this. Now this (deep focus). Last night, she came over for dinner to talk about process; she with her collection of short stories and me with my first novel. Although two decades separate us in age, and we have very different upbringings (I’m a Pacific Northwesterner; she’s French-American—that’s the short version), we both have a strong love for literary language, wartime stories, ordinary people, raunchy people, and an inexplicable affinity toward what some readers call “the masculine” identity or voice on the page (whatever that means). In any case, we “get” each other, and thank goodness for that. I could never chart the Bermuda Triangle (aka a first novel) without her.
Which is why, after she patiently listened to me explain the steps I’m taking in my process right now—that of interrogating my own work, a la Lisa Cron’s Wired for Story—my novelist friend, in her delightfully direct, French, commanding yet somehow diplomatic manner, relinquished me from any position of authority on my own work. How? She kidnapped my novel. 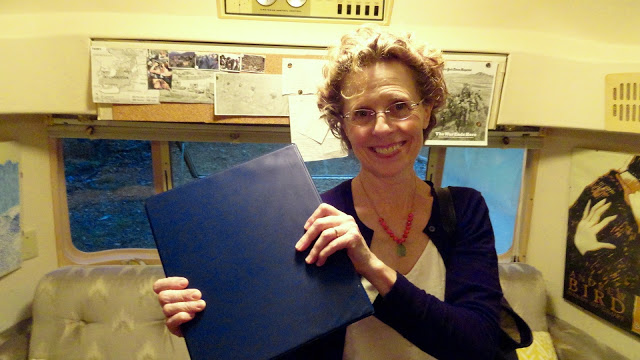 That’s right. The binder containing 235 printed pages of Still Come Home in its current state of disrepair, sat open on my desk across the room from where we ate. She eyed it. I eyed her eyeing it. It quite honestly did not cross my mind that she would ask to see it. After all, I didn’t hand it over when I said I would, and the academic year has already begun its drumbeat of deadlines in her university professor world. Yet by the end of the evening, she walked out of the Airstream with my novel in her hands and I felt at once relieved, exhausted, terrified, and ready to eat a pint of ice cream.
But before all that, she let me speak first, asking me to explain this interrogation process I’ve been going through.
“…And I know things now…” I said. “Like I know that Nathan’s internal goal is that he wants to be seen as valuable and capable and I know that his external goal is to get through the tour without a soldier dying on his watch and to get home and raise a second child.”
The novelist nodded. Waited. A skeptical eyebrow raised. I thought about guillotines; they had those in France, right? The morbidity of this thought would make her laugh, had I told her at the time (she’s that cool), but I suppose it meant merely that I knew my time was up. I knew she had a deeper secret she was about to share, and that she’d very likely be right.
I continued. “…And I also know that, to Nathan, these two goals are one and the same. In other words, he believes that if he screws up as a soldier or a father, that he is no longer capable. The novel is the story of him learning that you can fuck up and people still love you; that you can do everything right and still be wrong and still come home.” There was a lot more to say—I hadn’t even begun to explain Aaseya in the Afghan narrative thread (which is, in my current estimation, and entire effing pile of putrid barf, except for a few sentences here and there). I leaned back in my chair, breathless, and waited for what my friend might say.
In a nutshell, here’s what she offered: You are no longer in a position to make decisions about your own work. This is the “self-flagellation of the final lap.” You’re absolutely right about Nathan’s internal and external goals, but I don’t know that you—the writer—need to know those things. In fact, I’d argue that knowing those things could kill your novel. You weren’t meant to know those things. The novel is the work of the subconscious. Everything you read in Wired for Story may be right, but that doesn’t mean you have to entertain it.
Devil’s advocate, anyone?
Needless to say, I continued in my attempt at persuasion…but at that point, I was more trying to persuade myself than my friend. I told her about how I needed a sense of a “clock ticking” in the Afghan narrative, because otherwise the tension might not add up. I told her that I needed to make the build up to the details about the change in ROE have a “payoff” so that, when a soldier does die in the end, it happens through a situation that could have been avoided if it hadn’t been for that darn change in ROE. In other words, I told her how I needed to make everything tidy, according to this book…
My novelist friend listened again, so kindly. I mean this fully. She really is a thorough listener. But she’s also a no-bullshit-kinda-writer. She gave it to me straight, in effect advising: This extreme doubt and paralysis part of it. There’s nothing this novel will teach you that will help you with your next novel. There is no such thing as a foundation. This never gets easier. “I don’t enjoy the neuroses that go along with being a writer, but for me there is always story,” she said. “There is always the writing. There is always the freedom in that, the actual act of it. That will never go away for me.”
Her advice flowed further: Don’t kill this thing. You’re closer than you think. You got some good advice but there’s also bad advice. You have to sift through. You can’t take things too far. You’ve done a lot of good already.
By the time she left, I was ready to hand over the pages, albeit part of me still wanted to burst into tears. Tears of relief, of course, because now someone else will at least see what I’ve gotten myself into and perhaps help shed some light on how far (or how close) I may be to getting this beast off my desk.
Night descended and the Aistream grew darker. I turned on the living room/office/dining room light and it shone brighly, illuminating my empty desk. Sure, I can pull up the novel on my computer at any time. But the binder is gone. It’s in someone else’s hands. Maybe that’s for the better, right now. Meantime, I’m still going to do some deep thinking about the concepts in Cron’s book, but I’m not going to be as fervent or thorough. If something makes me queasy, I’m not going to push too hard. If something has the ring of hope, I’ll sit with it and see where it might take me.
Onward. Really. Onward is the only way I want to go.