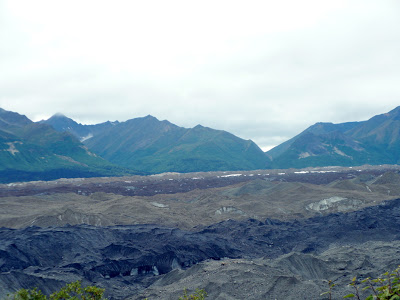 Our hike began parallel to the colorful moraine shown here. This photo was taken just above the foss looking across the moraine where Root Glacier and Kennicott Glacier join. The distance from the vantage point to Fireweed Mountain across the moraine is about 4 miles. Fourth of July Creek pours from the lowest indentation skirting the northern edge of the mountain. Note the varying colors and layers, and the ice peaking through beneath coarse ground sands. Here, a more thorough definition from Home Ground might be fitting, as it defines moraine in the following excerpt:

“One could do worse than simply to quote Joseph Le Conte, from A Journal of Ramblings through the High Sierra of California, published in 1875. Le Conte, the first professor of geology at the University of California, was on a hiking and exploring trip in Yosemite with John Muir when he made the following notes: ‘On the surface, and about the foot of glaciers, are always found immense piles of heterogeneous debris consisting of rock fragments of all sizes, mixed with earth. These are called moraines. On the surface, the most usual form and place is a long heap, often twenty to fifty feet high, along each side, next to the bounding cliffs. These are called lateral moraines. They are ruins of the crumbling cliffs on each side, drawn out into a continuous line by the motion of the glacier…If glaciers have tributaries, then the two interior lateral moraines of the tributaries are carried down the middle of the glacier, as a medial moraine…All these materials, whether lateral or medial, are borne slowly onward by the motion of the glacier, and finally deposited at its foot, in the form of a huge, irregularly crescentic pile of debris known as the terminal moraine.’…We might add to this the term ground moraine, which refers to a thinner veneer of glacial till laid down over a broad area…” (Robert Hass) 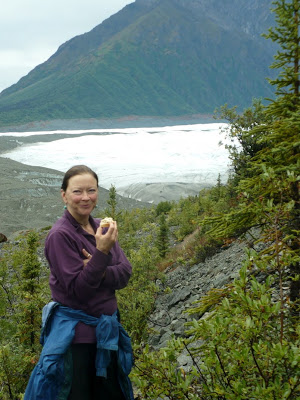 Here you can see the foss—a narrow corridor between the moraine and the rising mountains on the near side of the glacier valley—a place safe enough to hike, for a few miles at any rate. Beyond the lateral moraine the slick ice of the glacier begins to show, and now we know we’re getting close. 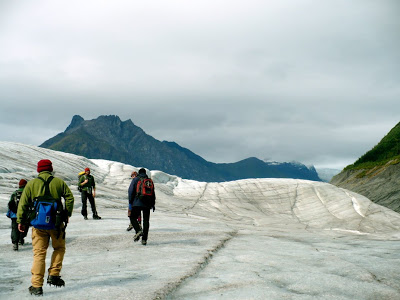 With crampons tightly secured and our friendly glaciologist/writer to guide us, we make our way out onto the ice. Many of us wear gloves, as even the slightest fall onto the ice can cut our hands. While the glacier is slick, it is also uneven and sharp from all the melting and moving that happens at inconsistent rates. Where small lines of sand pool together, more heat is gathered in the day’s long light, and so deeper lines are melted into the glacier. It is not uncommon for a single leaf to fall on a glacier and then, over the course of several days, a hole the exact size and shape of the leaf will melt down into the glacier. In broad daylight, one can look down that leaf-shaped hole and see the leaf a few feet down, a still-in-tact harbinger of fall. 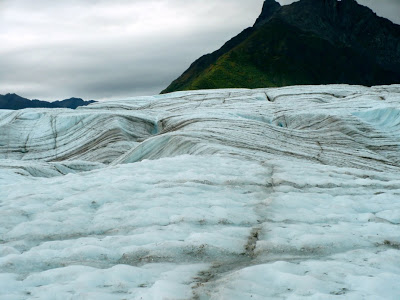 In the foreground, note the tiny blue waterfall, which is also shown in close up on this second photo. In the background, note Donoho Peak, a thin ridge that forms a tongue between the Root and Kennicott Glaciers and a prime location for Wrangell-St. Elias grizzly bears. 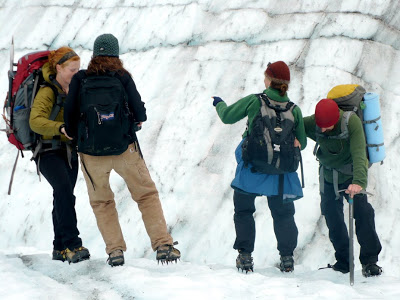 Here, I suppose, it is necessary to explain that dangerousness of glaciers. Indeed, a single slip and slide can be fatal, but that’s true in most places. What’s particularly precarious about glaciers are the inconsistent rates of melting, refreezing, and movement. Imagine walking on a 60-80 foot tall hunk of ice. Sometimes when you walk on this ice, it is supported by the solid earth below it. Other times when you walk on this ice, it is floating atop a lake. Still other times, it precariously straddles temporary streams and pools hidden below. Now up the scale of this imaginary ice form and picture the Kennicott Glacier, which runs for over 25 miles high up into Mount Blackburn, a peak in the Wrangells over 16,000 feet in elevation. Make it deeper and wider and add unforseen weather. Then maybe, just maybe, the look and feel of a glacier will overtake you.

In addition to the movement happening beneath the ice—movement that can’t be seen and can only occasionally be heard—there is plenty of movement above ground that one must pay attention to. In the photo above, our leaders tack into the side of a moulin and offer supportive hands as the writers walk in pairs up to the edge for a peak at the death trap below. And in the photo below is only a 5-foot wide section of the deep ice cavern we glimpsed over the edge: 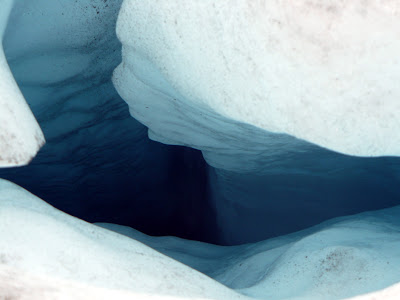 Home Ground defines a moulin in the following excerpt:

“A moulin is a sinkhole forming a vertical shaft in the surface of a glacier. It is worn into the ice and sometimes into the rock beneath, by the circular movement of meltwater, swirling down it. The name, from the French word for mill, as in Moulin Rouge, comes from the motion of the water. The following observation by an experienced mountaineer may help one keep in mind the distinction between a crevice and a moulin: ‘Falls into crevices are often not serious, or at least are survivable (even unroped if you are lucky), but a fall into a Moulin is instant death.’” (Robert Hass)

Because they are always moving and changing, such formations are not on the topo maps of glaciers. Likewise, pools such as this which can eventually form into larger moulins are not mapped either. One moves cautiously on the ice, always with ears and eyes at full attention. 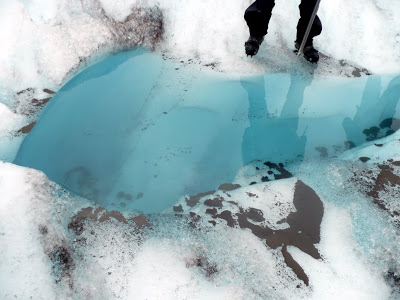 I would like to tell you that we hiked to the end of Root Glacier. I would like to tell you that this formation, for all its scale and beautiful destruction, is also among those things that humankind has evolved to experience. But this would not—and could not—be true. Five miles further along the face of Root Glacier and one encounters what can only be described as the end of the world as I’ve ever known it. There are indeed many places on this planet that no human has ever gone, and these places by and large are the ones that reach up mountains toward the sky or descend into the ocean depths toward the earthy innards of our planet. 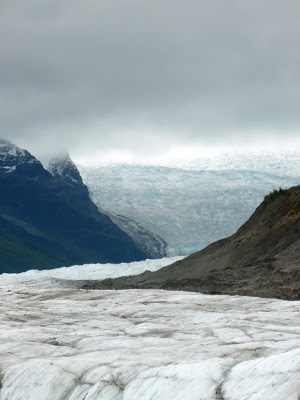 Here, a wall of ice higher than a city building. A wall of ice so gnarled and knotted that even the world’s greatest climbers will not attempt it. Here, a wall of ice that marks the furthest I have ever been from my own bed in my entire life: Rewind 5 miles atop the ice, back 64 miles down the rugged McCarthy Road, back another 240 miles on the highway, back further still a 1,500 mile flight south to Seattle, then another 3,000 mile flight to Asheville, then 75 miles further in a car toward the Appalachian Trail, then finally the last 1/2 mile in a beat up old Ford Ranger. There’s no place like home, but in the face of such a humbling formation as this glacier, I might have stayed entranced on the ice for all of eternity—let that moving beast melt me down into a body-shaped sinkhole, tumble me down a Moulin and along under-glacier tributary, down further to some final, fantastic resting place where I could freeze that awestruck feeling and sleep with it for all of eternity.

[Stay tuned for a post on writing craft notes tomorrow…]