Bird Attack: Foot in the Door

0
1
There is only one way to say this: Andrew Bird’s manager responded to my query letter. 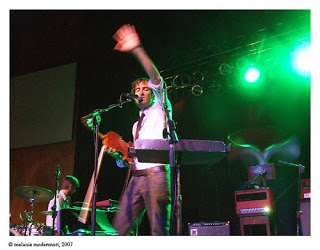 She invited me to call her office any time, to write whatever I wanted, and to feel free to check facts with her. She is a nice person. The good part of this: I have not been written off as insane and I have my foot in the door. The bad part of this: I wasn’t clear enough in my query letter.
Enter, plan of action: I pick up the phone, heart pounding, and dial the ten digits. A man answers. I open my mouth and words come out:
“Hi, this is Katey Schultz calling for Andrea.”
“Just a moment please.” [Put on hold…] “She’s on the other line, Katey, can you hang on a minute?”
“Yes,” I say. “She responded to my email about writing about Mr. Bird’s music so I am calling to follow up.”
[On hold…]
“This is Andrea.”
“Hi Andrea, this is Katey Schultz…” She remembers who I am. I thank her for her response to my slightly tongue-in-cheek query letter, then get down to business. “I’d like to be considered for your short list of writers available to write in depth about Mr. Bird’s discography,” I say.
She talks for a while. Something about a publicist, about Andrew’s upcoming year (or year-and-a-half) off, about hiring a new publicist a year from now when the next album is in the works. She mentions that magazines like Spin, Paste, and Rolling Stone already come with “a fleet of writers,” to which I respond with a knowing “Uh-huh.” In short, she says call me back in a year.
What she may not know is that, to the exact day, I will do precisely that. At that time, she tells me, she can put me in touch with whomever their new publicist is and we can go from there.
“Thank you, I will certainly do that. But I’m also aware that on the Airmchair Apocrypha tour there was a small chapbook for sale at the merch table. It was hand printed in a limited edition run. I didn’t buy it because I bought something else, but I noticed it,” I say. “I noticed it and I thought that I might like to do something like that. While I may not be breaking in with Rolling Stone, I can certainly write a relatable, comprehensive, accurate essay with as much information as something that Rolling Stone might print, but with a more personal feel that reflects…[Insert embarrassing string of approximately five run-on sentences]…You know?”
[Awkward silence.]
“Yeah,” says Andrea in a genuine yet generously upbeat tone. “And in the meantime, feel free to try and break in to the music writing scene as much as you want. That won’t hurt any and it might help a year from now.”
“Thank you,” I say. “But I’m not actually interested in being a music writer. [Insert internal monologue that plays in my head over the top of my speaking voice. The internal voice says: Stop talking, stop talking, stop talking.. The external voice continues: ]…I only want to write about this man, this music. One time. The perfect essay.”
“I see,” she says.
“I’ll call you in a year.”
Andrea laughs a little—a kind laugh, but a little laugh. “Talk to you then.”
I hang up the phone and walk out my front door, down Fork Mountain, over two overflowing springs, round the bend, past the dog that wants to eat me alive, and all the way to the pavement. It is raining. I stare at the pavement. I stare at Little Rock Creek, raging louder than a John Deer tractor. I stare at the sky but it hurts so I stop. A writer must be willing to make a fool of herself, I think to myself, and I know this is true. But I also know that if there’s nothing at stake, it’s not worth writing about. How much is at stake here? More than I have words for.
Here’s hoping.
Comments